June 1942, shortly before the raffle in Vél d’Hiv in France. Mado is 10 years old; she crosses the dividing line between the occupied zone and the free zone with a group of strangers, without her parents. The group is accompanied by a smuggler, who Mado’s mother previously payed with some expensive textile. She crosses the border at night, and takes a train alone to Vichy, before being welcomed by a peasant family in Auvergne for several years. Starting from the story of Mado, her grandmother, Léa Drouet transports us in her new creation, Violences. In it, rather than representing direct violence, the artist works in showing the conditions that make it legitimate. Alone on stage, inside a sandbox, she builds and undoes architectures made of walls, landscapes, borders, through which the storytelling evolves. With a dramaturgy of resonances, the story of Mado rebounds in recent events – the story of Mawda, a 2-year-old Kurdish girl shot dead by a Belgian police officer in 2018 – that echo what contemporary violence and its forms of resistance can be. If usually sand is what absorbs all traces, often erasing traces of violence too, here it also holds the promises of future configurations, which Léa Drouet, alluding to a child who plays, experiments and presents before our very eyes.

Violences is streamed live from the theatre every night, allowing this investigation to be accessible beyond boundaries and travel possibilities.

The performance on 14.05 will be dubbed in Sign Language of French-speaking Belgium (LSBF)

In Violences, Léa Drouet evokes the tragedies of our time using a subtle minimalist  language.

For Léa Drouet, the theatre stage is a space where languages are invented to present contemporary tragedies in a different way. It is a place where human science assumes a  body and voice, far removed from preconceived ideas. For example, in Mais dans les lieux du péril croît aussi ce qui sauve (2016), she shares statements she collected from skaters about their relationship with injury and risk. She also questions the notion of the group, something she continues to explore in Boundary Games (2018), in which the migration crisis in Europe takes the form of a choreography for six performers manipulating rectangular objects.

Created in September in the framework of the Actoral Festival in Marseille, Violences continues this research into forced displacements. In collaboration with the philosopher and dramatist, Camille Louis, Léa Drouet has constructed a minimalist vocabulary where objects  and gestures blend with words to challenge our gaze. She calls for the birth of a new witness.

No image of a child stranded on a beach in Violences. No trace of a boat or refugee camp. Only sand as the landscape, where cubes and other colourful forms suggest a human presence. Lit by projectors, Léa Drouet seems immense in this deceptively playground-like setting. Dressed entirely in black, like a puppeteer who wants to make us believe in the autonomy of her creatures, the artist manipulates the materials and objects with a slowness and precision that from the outset, take us far away from prevailing representations.

Moreover, we can’t really talk about “representations” as such: at the crossroads of  installation, narrative and gesture, Violences remains at the threshold of the image. Through  the parallel deployment of corporal expression and speech, which maintain the complex relationships, Léa Drouet invites us to leave behind the passivity into which we are plunged  by the influx of information and to adopt a more active and critical stance.

Using the gentle tone of a storyteller, sometimes almost a whisper that she sustains throughout the performance, Léa Drouet begins by evoking her personal connection to the phenomenon that interests her. She recounts how, at an age when other children were playing in sandpits, her grandmother was forced to flee the country where she herself “was  born but does not live”. Without being explicitly mentioned, the memory of the Vél d’Hiv Roundup gives the sand an unusual gravity and density. The artist continues with a narrative that does not concern her directly. Nourished by research into a series of social movements – “the 2005 riots, the Adama Committee, yellow jackets, the liberation struggle of the Kurds  being waged in the Rojava” – as she explains in the programme, the actor tells the story of  the murder of little Mawda by a Belgian policeman in 2018 during a car chase. A tragedy that evokes many others.

Bereft of the sensationalism often associated in the media with the reporting of these types of facts she recounts, the words of Léa Drouet are inscribed in a very personal ritual that is understandable to all. By evoking disappearances in complete simplicity, without imposing any reading of events, Violences invites us to become active witnesses to the disasters of  our time.

Thanks to the spaces that clearly separate all its components – gestures and speech, the  word and what is signifies… – this creation succeeds in creating the necessary conditions for  violence to occur while thinking outside the beaten track of a good conscience. By mixing our small, intimate exiles with large collective departures. 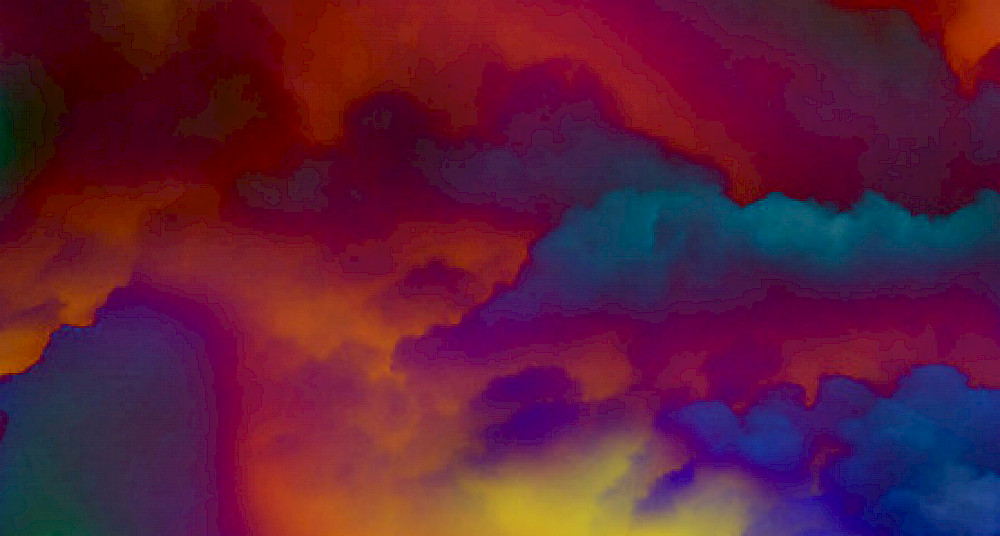 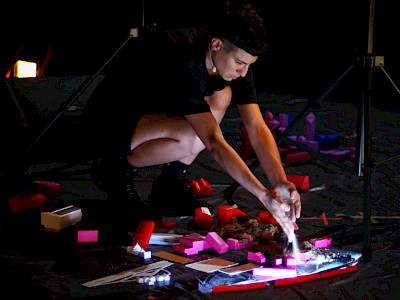 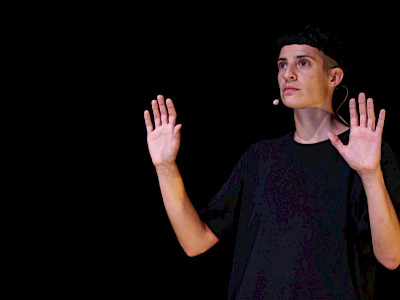 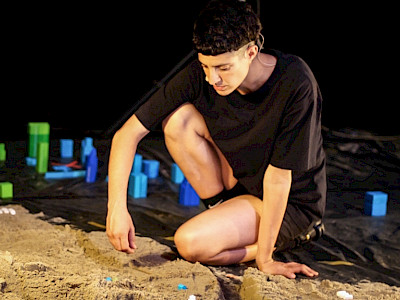 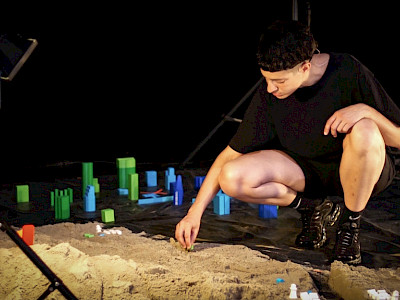 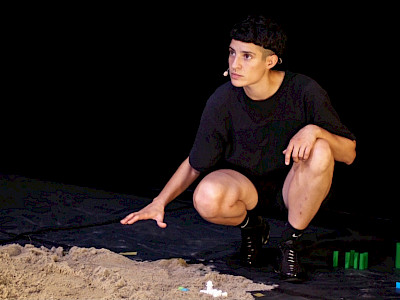 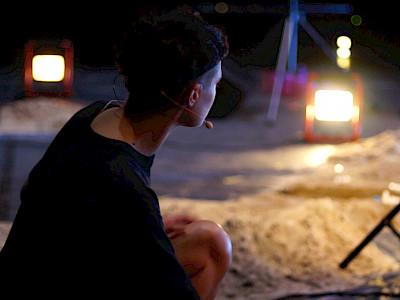 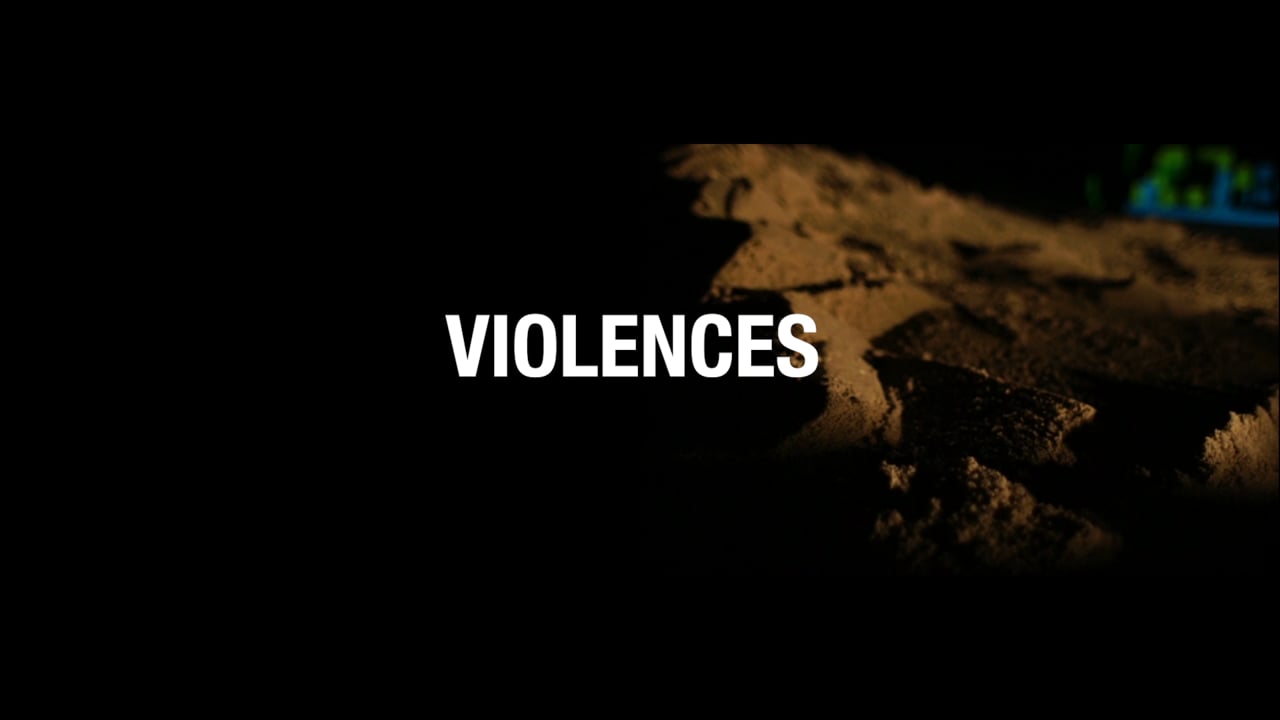 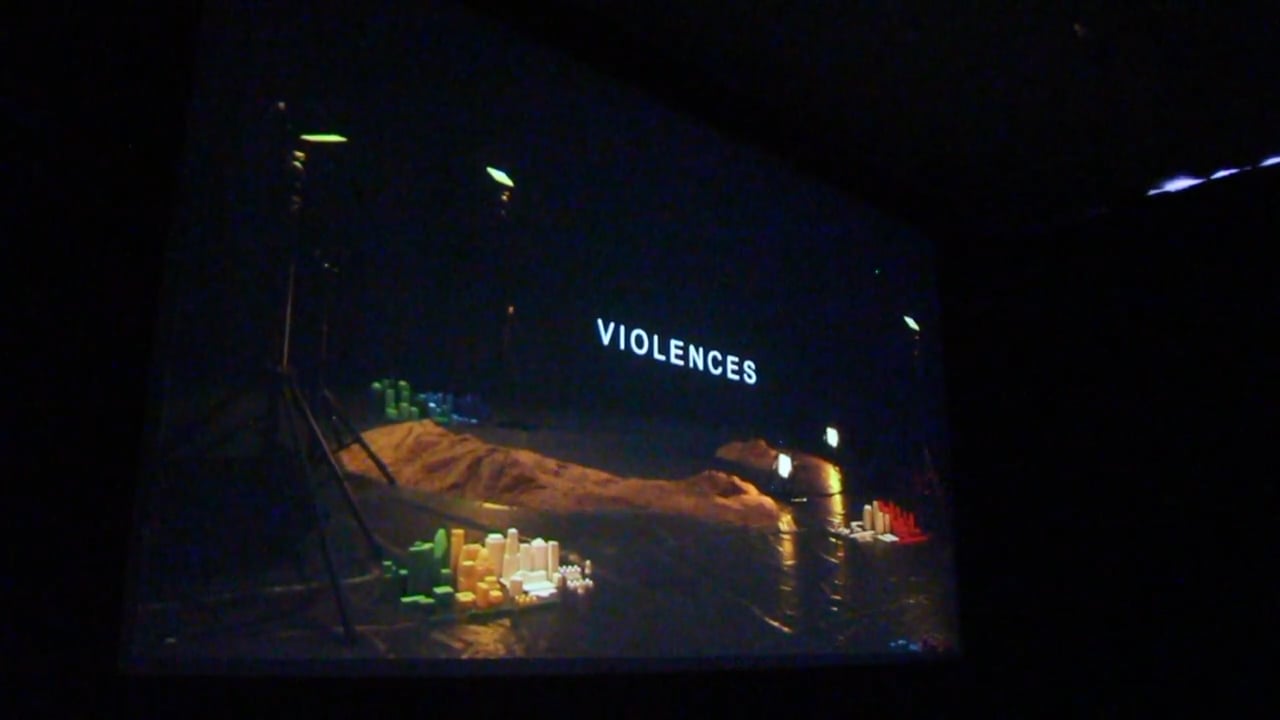