In 2018, a youth soccer team became trapped in a cave in Chiang Rai, one of the most mediatised events in Thailand’s recent history. Some of the boys did not yet have Thai nationality, and the country tried to grant it to them in time, to create the narrative of the team as national heroes. In No History in a Room Filled with People with Funny Names 5, Korakrit Arunanondchai and Alex Gvojic interpret this episode through ghost cinema, a tradition of holding screenings without human spectators, and reserved for spirits only. Its origins date back to when American soldiers were stationed in Thailand during the Vietnam War; they would project light onto the trees across the border to confuse the opponents, and the locals would attribute this to ghosts. In his non-linear style of storytelling, Arunanondchai and Gvojic create an incredibly visionary work: an investigation into nationalism, beliefs, and the right of asylum. Presented in the space of the Brigittines chapel, No History in a Room Filled with People with Funny Names 5 becomes a triptych of expanded cinema, resonating with the interior architecture. It is a ghostly journey accompanied by green laser lights, hovering somewhere between transcendence, war operations, and the infrared vision of speleological missions.

The artist explains the thinking behind his latest film in our series in an interview with curator Andrea Lissoni.

Korakrit Arunanondchai’s Painting with History in a room filled with people with funny names 5 started in 2013. It is part of a series which combines video works, performance and installation to explore the relationship between nature, technology and societal emancipation. In this 5th episode, Arunanondchai collaborates with Alex Gvojic to explore the relationships between humans and other animals in the context of contemporary Thailand, intertwining ritual, fiction, and reality and reflecting about the past and future of the country. He shared some of the thinking with curator Andrea Lissoni. ‘art awareness’

In many interviews and critical texts about your work, fire seems emerging as a leading element, a recurring element in your videos and paintings. However, I’m fascinated by how water is infiltrating your works as well as spilling from them. There is something about its ephemeral and transformative presence. Everything just spills and drifts from one stage to the other. There is never a proper wall, every division is kind of transpiring. Everything is porous, as if made of membranes. For the 9th Berlin Biennale, you created a site-specific installation on a boat that traveled up and down the Spree River, and to enter the work one had to go down – so when watching the video part of the installation, viewers were not floating by were literally underwater. The experience was that of sneaking and finding refuge under a mangrove.
Definitely. I didn’t think about that. On the top of the boat, there were sculptural works that resembled trees, so the movie room underneath was almost like you were at the roots. I’ve been thinking about ancient tombs or funeral rituals, specifically dating back to the Neanderthals or even great apes. In between monkeys and homo sapiens, there are these long millions of years, and scientists discovered that there was a moment when they started to see beauty and even connect to the sacred in the way that they arranged objects in a ritualized manner. So I am trying to make these moments happen in a very subtle way.

There was a sculpture emerging towards the end of the exhibition space at J1 in Marseille – a gravestone, a reliquary, or a monument. What did it stand for?
In the video, boychild always plays this character, the Naga – a non-human character, body-painted in green Gaia, which is inspired by a mythological serpent in the Buddhist tradition. At the end of the video, like an agent of nature, she comes out and puts my character, which is like an avatar of myself, to rest. It’s all like gesturing towards this other world not so defined – like, ‘I’m exhausted and just transitioning.’ Human beings are always thinking about leaving something behind. A lot of times, that’s why temples and such are built – palaces, monuments, pyramids. So when you move to the next room, it’s like her time has past, she’s already turned into a weird, worshipping tomb for herself. For me, it felt like it capped the show in a way.

In the performance with boychild, you also employed a laser harp, which provided a sense of green verticality (and elevation) to the whole. Can you tell me more about this?
It’s a little bit like a new ritual I’ve been performing. Factually, it’s like a musical instrument. When you touch each laser beam, there’s a sensor linked to a different MIDI controller, which activates sound. One of my main collaborators is music composer Aaron David Ross, who did sound and music for my last few videos. I had finished History in a room filled with people with funny names 4, and I was thinking about a way to extend it into performance. I wanted to create a musical hardware out of something invisible or uncapturable, and sort of make a light sculpture out of it – which in turn, would then become music and a script for boychild to play. I said this to Aaron, and he was like ‘Well, there’s this called a laser harp. You should get it and try it out.’ There’s something amazing about it, it’s this light that you can essentially touch.

Did you have a script for the performance?
Yes, boychild and I wrote it together. I took out most of the sound of all my videos, and I was doing this reading in Thai while in the other room, boychild was performing a new character, which she calls the ‘bottom feeder,’ picking up leftover pieces of my script. Each character or version of herself that she plays in the video is also added a set of movements. Alex Gvojic, another of my long-time collaborators who usually films the video and controls the environment, was in the same denim costume as us and was videoing her, but very much visible in the performance as a performing videographer. Then, the live video of her was sort of being live feed edited back into the screen that I was reading from. So, it created this loop where I was kind of touching her through my voice that she doesn’t understand, because I was speaking in Thai. When the video finishes, I walked over to the other room and performed the laser harp script with her. There was this kind of déjà vu, or time warp, I really felt. I think the audience felt it, too. In a way, it’s like the boychild green tomb at the end of the exhibition in relationship to seeing her in the video – this kind of weird, fucked up, non-linear time thing that started to happen, where what you saw on the screen, then you would also see in the room, but then you almost saw the future. It’s difficult to explain. 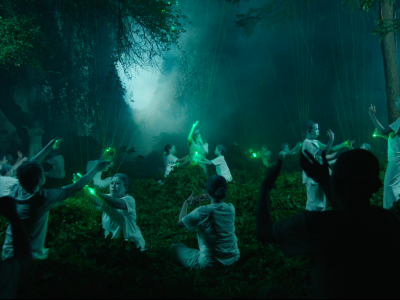 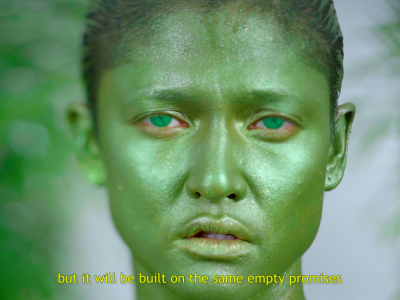 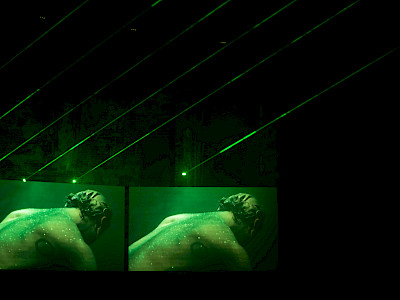 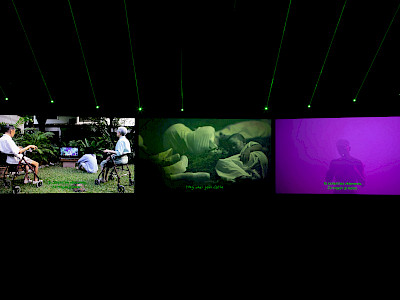 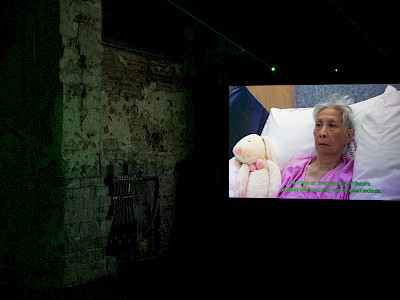 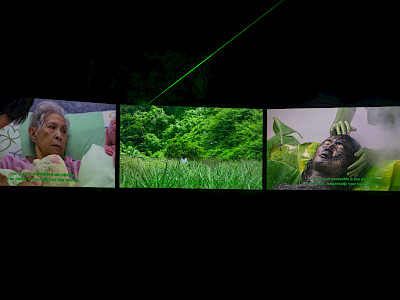 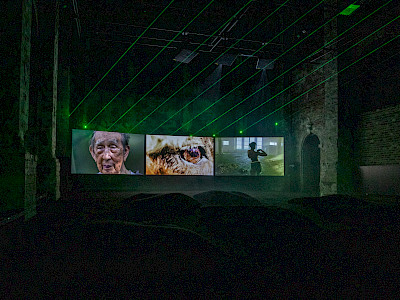 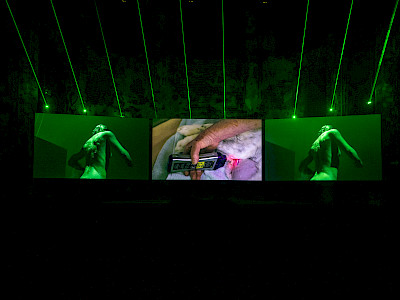 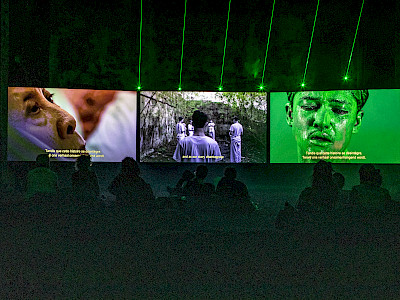 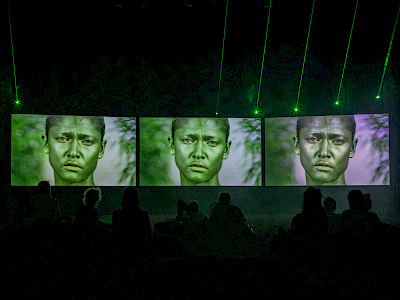 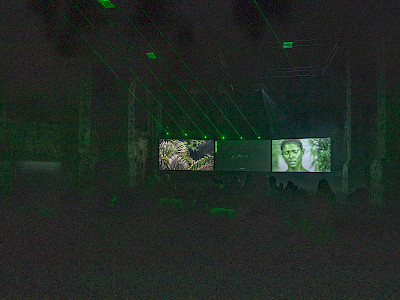 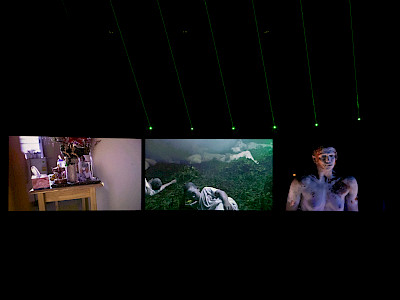 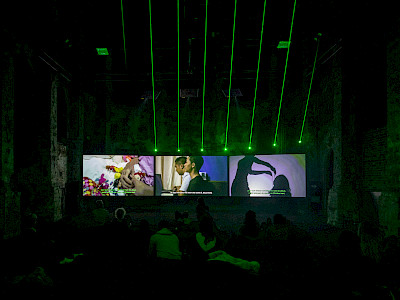 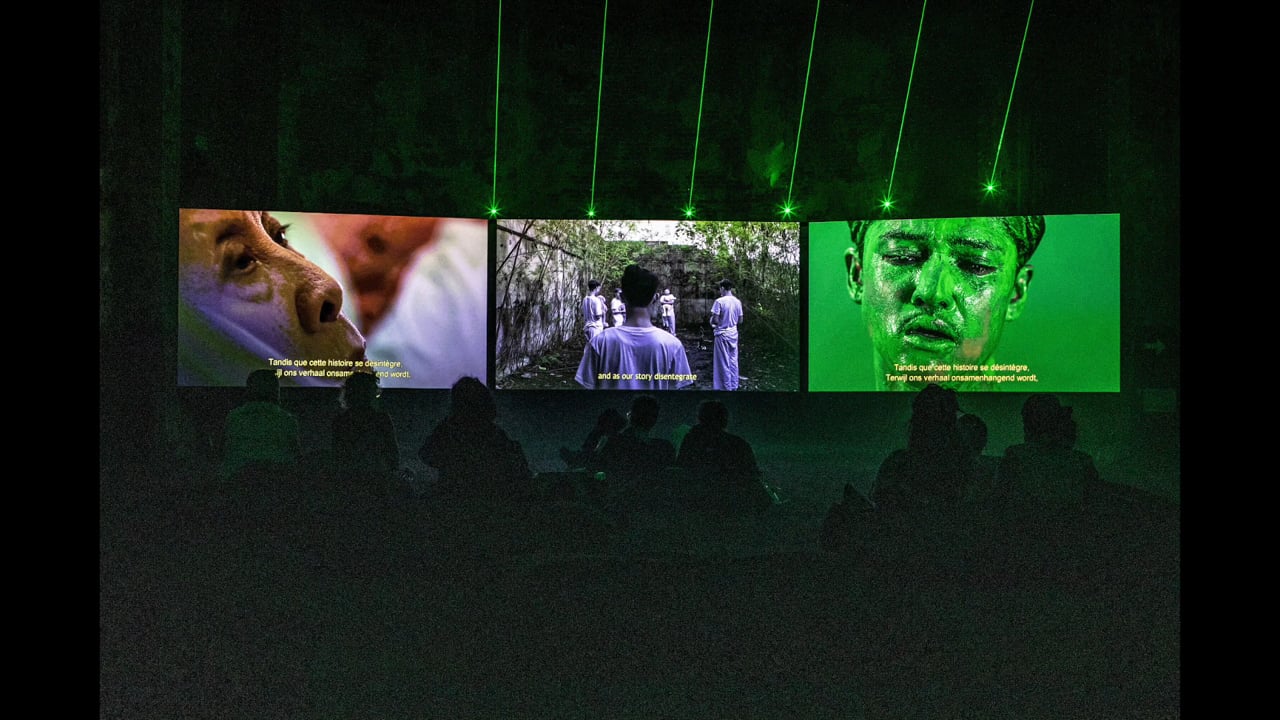 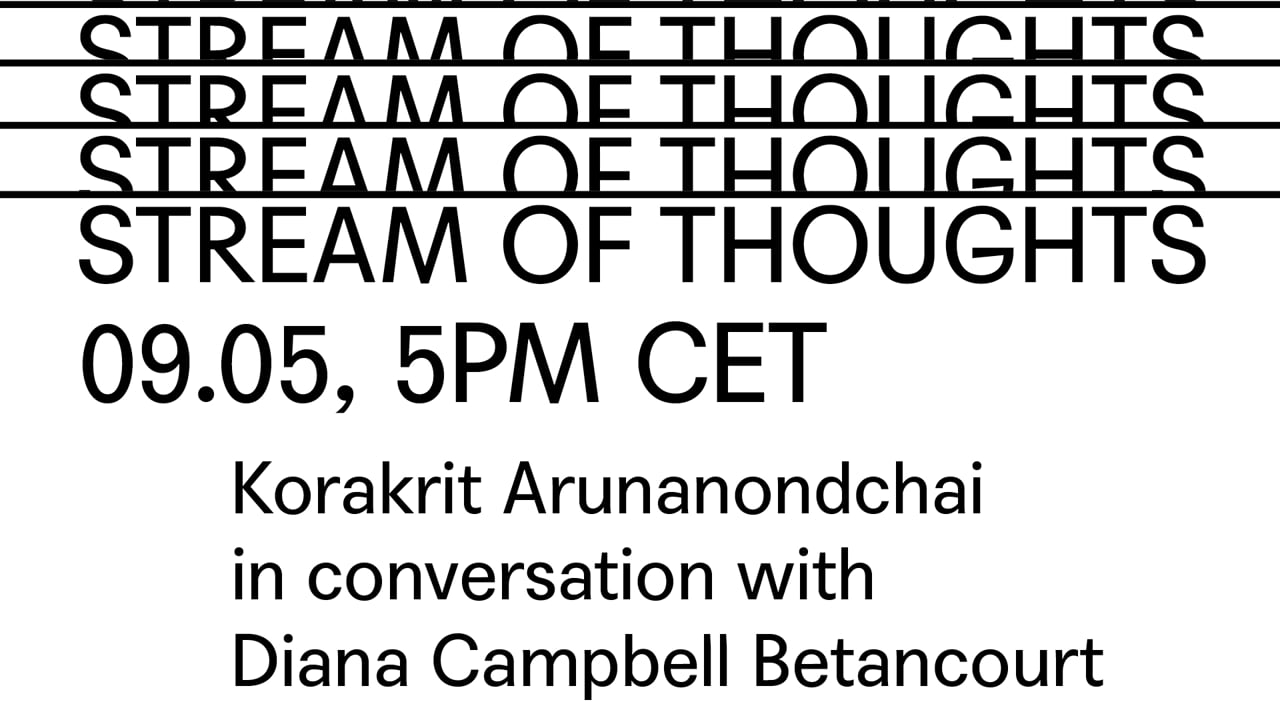