How can we challenge the hierarchy of discourses in society so that knowledge is shared in a more horizontal, fairer and more inclusive way? Can an artistic intervention facilitate the circulation of non-dominant knowledge in public space? After Lecture For Every One (2013), Untitled (2014), Oblivion (2016) and Lecture For Every One – 20 reworked in 2020 with a group of youngsters, Sarah Vanhee is now presenting body of knowledge (BOK), a semi-nomadic class held in various parts of Brussels over a number of months. Where there are no teachers or students but rather a group of co-learners, and that prefers experts in life rather than professional authorities. BOK reinforces the value of personal knowledge, and presents various classes that include: how to defend yourself in the public space, have less fear, care using your hands and raise children in a feminist way? All this is knowledge that many do not generally learn, told by voices who are not always heard, coming from different parts of society and the world, and encouraging a more humane and equitable society.

BOK-téléphone is a switchboard that brings together the knowledge of 35 Brussels youth. Come to the phone booth in Institut Pacheco, and call one of the young people to learn from them on topics such as "what to do with all your imagination", "how to love yourself", "how to stop police violence", "how to be more patient", etc. Each phone call will last approximately 15 minutes. Reservation required.

At BOK à pied / BOK te voet, you take a walk with someone you can listen to and learn from. During this one-on-one walk of about 45 minutes through Josaphat Park, a body of knowledge will share their experience and knowledge with you. Would you like to join them for a walk and learn from them? Check the program and book your walk on bodiesofknowledge.be from 11.05.

Bodies of knowledge: how we can learn more from each other

If we ask ourselves how art schools can better relate to a changing world, one of the first issues to address is knowledge transfer itself. What do we really mean by ‘knowledge’? And what assumptions lie behind the Western idea of passing on this knowledge? We asked artist Sarah Vanhee to share her reflections on her bodies of knowledge (BOK) project, a study of less directed forms of shared knowledge exchange. It may be an inspiration for art schools.
What does bodies of knowledge (BOK) exactly mean? The complexity of knowledge exchange starts with my attempts to explain this practical study in a comprehensible way. In my imagination, I see a place for the exchange of alternative, non-dominant knowledge emerging in towns and cities. But who would be drawn to this idea and who wouldn’t? Communication is performative. I say to my 4-year old son: ‘In your school you have your own classroom, don’t you? Well, I’m making a classroom like yours for grown-ups. Where grown-ups can learn things from each other, for example at Place Flagey [in Brussels].'

In Manchester I was speaking to a diverse group of young people, aged between 17 and 22, and I said: ‘When I was young, I didn’t like going to school. I wanted to learn, was quite curious about many things, but sitting in the classroom immediately killed my thirst for knowledge. I really didn’t understand why we had to sit still for eight hours, with all those hormonal changes going on in our bodies, listening passively to uninspired teachers who always told only one side to a story. Is this growing up? I didn’t want my son to have that sort of learning experience. That’s why I wanted to create a kind of place where learning is a positive experience, where people can learn from each other, outside of our little bubbles. Not from books, but from what we know as a result of our lived experience.’

Does our official schooling really do what it was designed to do? My own experiences in that area reflect those of Tagore. During the 1990s I attended a conventional secondary school in West-Flanders [Belgium]. The school management was relatively open-minded. There were at least a few inspiring teachers who – regardless of the subject – managed to engage the students and make them think, or who took a personal interest in somebody.

But in general I experienced school as a system which was obliged to routinely train us in reproducing theory and had little to do with our lives. Teachers who could not impose their authority were mocked. Students who showed too much interest were not popular. After secondary school I did not go to university because I thought – rightly or wrongly – that I would end up in a detached knowledge factory. Because of my much more positive experiences with my extra-curricular poetry and drama tutors, I decided to do something in the direction of acting (not knowing, at the time, that you could also study ‘art’). I wanted to learn something that would make me feel awake and real, something that wasn’t all about excellence and competition. I followed courses in Belgium and the Netherlands. The former entirely negative, the latter positive. I hope the Belgian schools have changed in the positive sense in the meantime, but during my time we were mainly taught by people who had just missed a role in Thuis [a Belgian soap opera], or who had been appointed to a permanent position many years ago but who no longer practiced in art. The tutors were predominantly men, while 95% of the students were women. They were all white, cis, ‘healthy’ and slim. The only student with a working class background was forced to give up her studies after a year. The only tutor who really engaged was unfortunately also the one who gave classes in his bedroom. Later, in Amsterdam, I fortunately found myself in a pedagogically responsible environment, with committed tutors who had practical experience and was able to set out along my own track. It was headed by a woman who did not exert her authority but provided a listening ear for many people. Throughout my time at art colleges I engaged in independent study in parallel, with research in philosophy, sociology, ethics, law, and so on, as well as in practical projects through various social engagement initiatives. Of course, I remained a dilettante at everything. Through lived experiences and friendships I learnt that I could articulate and transform my intuitive resistance to social injustice and distorted patriarchal power dynamics, and that I could try to use my privilege as a white, highly educated, ‘healthy’ woman to help bring about social change. Gradually I learnt that art and life cannot be separated.

For all these reasons, I believe that it is important that BOK will now run for two years in the city where I live: in Brussels, where connections already exist. Work and life have always been very closely linked in my artistic practice, in the same way that art, citizenship and humanity are linked. But now I want to be able to give that ‘locally anchored’ work a more substantial and structural dimension. Here in our own city we hope to activate the potential for a ‘commoning’ of alternative knowledge exchange by unlocking and connecting various ‘bodies of knowledge’. We will achieve this in a semi-nomadic way: BOK will be located in the same square or park in one of the communes of Brussels for several weeks or months at time, then will move on. In this way we will create a ‘place’ which will travel slowly within the public ‘space’ of the city. From humanistic geography, I learned that, 'space' and 'place' are important concepts’, and they do not have the same meaning. 'Space' is something abstract, without any substantial meaning. While 'place' refers to how people are aware of/attracted to a certain piece of space. A place can be seen as space that has a meaning. 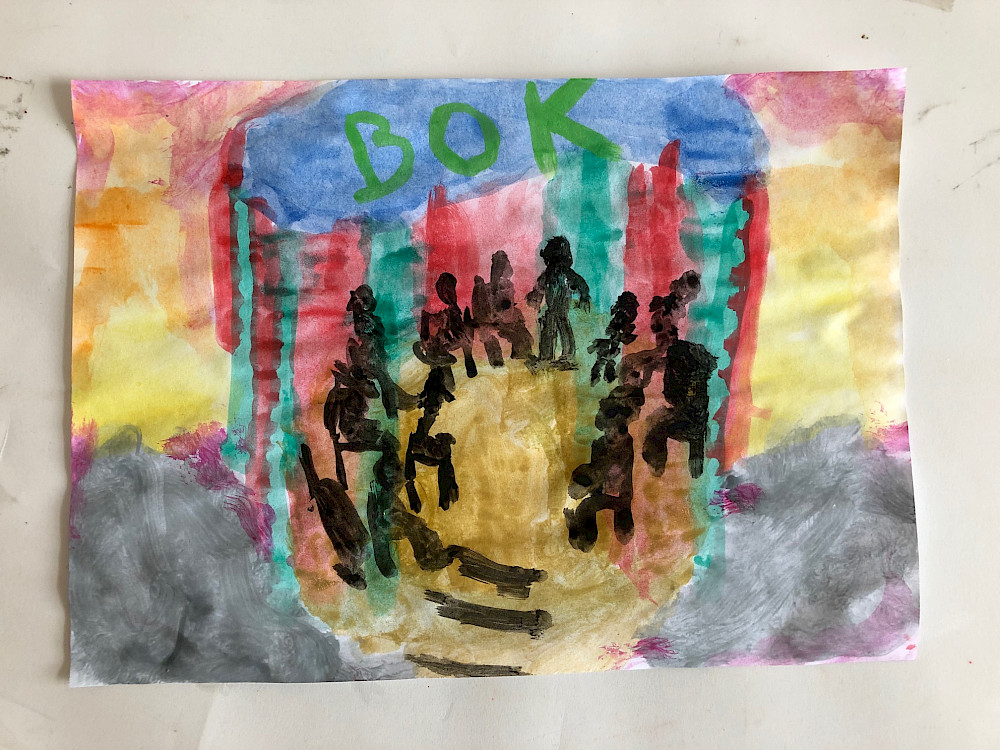 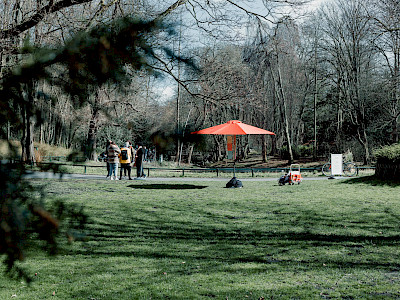 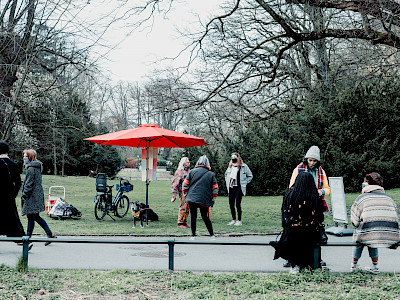 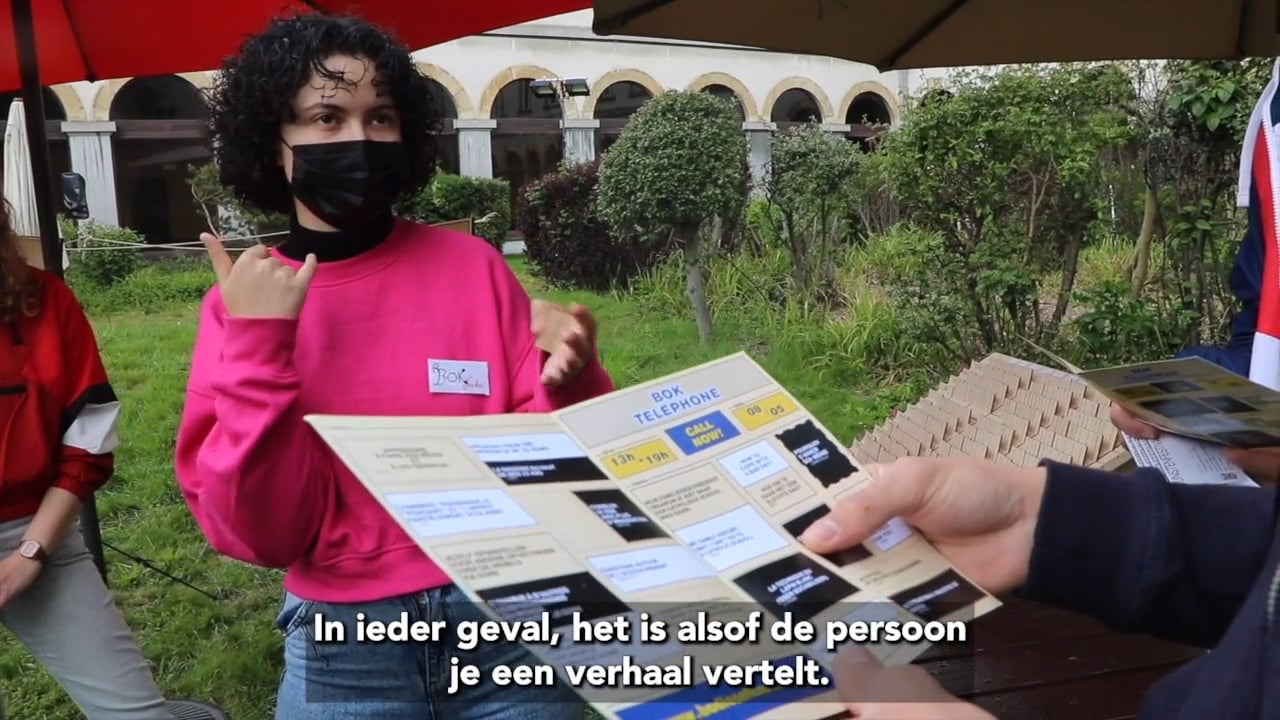