Michel François is creating a theatre piece! The renowned Belgian visual artist has been given an unambiguous commission by the Kunstenfestivaldesarts to devise a piece to match the scale of the grand theatre at KVS. With the involvement of his daughter, the young actress Léone François, the artist intends to literally “put on stage” the theatrical ritual and all the practical, technical and architectural elements involved. Taking a candid look and with boundless energy, he fills the theatre’s space, exploding all its codes and turning what is left into a show in which the actors and audience, light and sound, stalls and stage keep reversing their roles. Everything is there, but everything has been shifted and rearranged differently. Forget all that you thought you knew about theatre: brazenly frustrating expectations, this new work offers an unusual experience and disrupts our way of looking at things.

Take The Floor is a project that was supported by the Friends in 2015.

Asked to devise a project for the stage, sculptor, video maker and photographer Michel François decided to involve his daughter Léone, a young actor, in the creation of this show-performance.

The starting point, which motivates the appearance of the events seen on stage, intends to be “executed” rather than commented on.

On the surface of it, Take The Floor is an experimental show about sculpture or rather a show of sculpture. About the possibility of it (or its resistance to) being dramatised. About an image’s stirring capacity to suddenly appear out of the material. To do this, the show plays on interactions between bodies, personal stories, objects and materials, and the theatre itself becomes the tool and the material for producing these events, these sculptural actions. Out of a collection of materials and devices, summoned on stage or already there, comes a sort of plastic symphony that plays on the tensions between the animate and inanimate, control and improvisation, order and chaos, oral narration and silent material.

At the heart of the project is a network of relationships.

A relationship between a visual artist and an actor, and therefore a confrontation between two disciplines that have two different relationships to space and time. What is theatrical about sculpture? What is sculptural about theatre? In a playground can you have a game whose rules differ from the game for which the playground was designed? What types of “synaesthetic” relationships (the shift from one sense to another) exist between two fields of creation?

A relationship that blends reciprocal desire, incomprehension and curiosity. Generally, the two protagonists engage in a dialogue on the basis that it is a shared “game”, and you might wonder at times who is the more mature: the older man or the younger woman.

A relationship between a father and his daughter. This more biographical part of the show involves a process of transmission, even though it is contingent and indirect. Each “actor” has a double on stage who acts simultaneously, slowing down the processes, provoking parallel and complementary situations or repeating events that have taken place.

The title of the show Take The Floor literally means taking over the space, but also speaking in a debate, in a logic of the baton being passed in a relay race. In fact, Michel François, whose father was a painter and whose mother was a dancer, says he chose sculpture as a “middle course between dancing and painting”, starting out in theatre and then opting for something that he thought would give him more freedom. Meanwhile, as a child, Léone was the reluctant subject and model of her parents’ art forms, manipulating the works while being manipulated by them, and she has chosen theatre as the place for creating her own forms.

In Take The Floor, the theatre stage is the place for showing and making public this network of relationships. The dynamic and gliding space in which a baton is passed between disciplines and generations. A story of interconnected skills being confronted on a stage that has meanwhile become a sort of open and spontaneous experimental workshop.

Theatre versus sculpture. The liberal arts of the stage pitted against the more servile art of painters and sculptors. What is meant by theatre is the minimum conditions of a given space, time and audience. What is meant by sculpture is the minimum conditions of a changing material. With that as the starting point, the stage is a common place to be shared by two disciplines, by two protagonists, by Michel and Léone François who each follow their plan while regularly interacting so as to be crystallised in a succession of images. Perhaps for Michel it is about using theatre as a plastic material. Perhaps for Léone it is about using sculptural material as a dramatic prop. Or vice versa.

Fondation d’entreprise Hermès, in the framework of the New Settings programme

With the support of 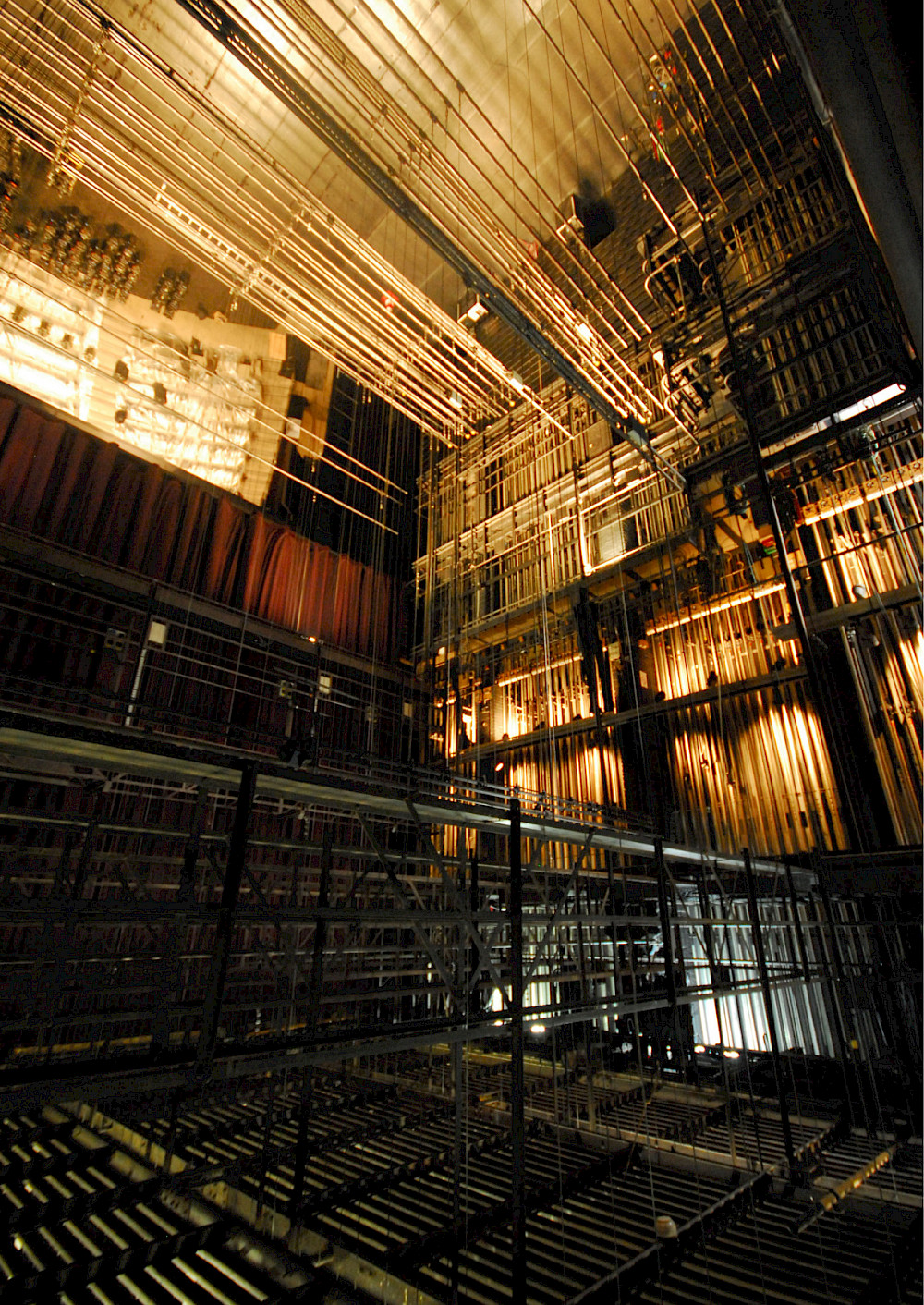 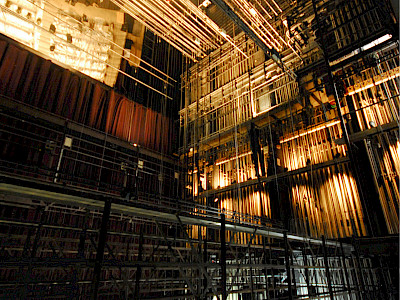 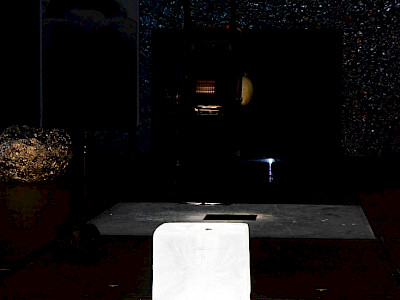 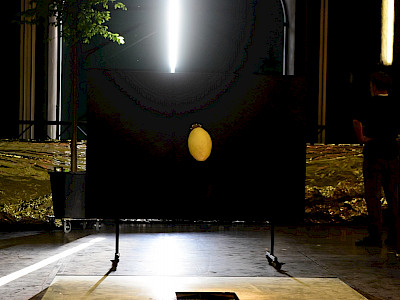 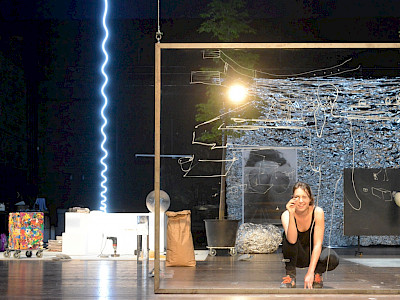 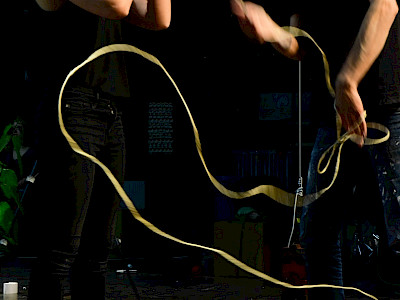 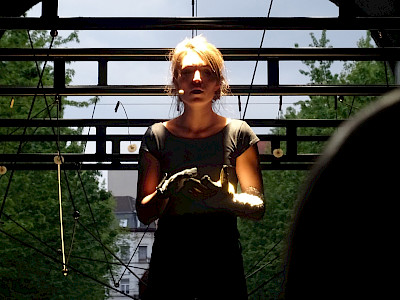 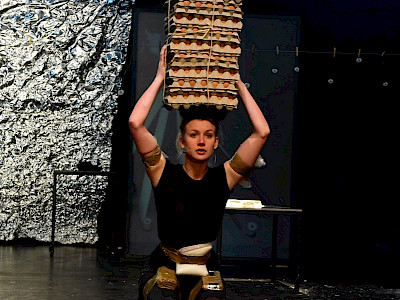