The performance The Journey takes you on a sound experience in a space in Bozar, which transforms into the hull of a moving ship. It all started in 2010 when Rossella Biscotti was awarded a 20-ton block of marble. During last year’s Kunstenfestivaldesarts, she created an invisible performance: the stone had been loaded onto a boat, navigating a GPS-determined route between Italy, Malta, Tunisia and Libya, to finally be dropped into the Mediterranean Sea. Biscotti used the block as a mechanism to unpack the political, economic, and environmental layers of a complex body of water. The sound recorded last year in the middle of the sea is the starting point of today’s immersive sonic performance in Bozar: the hum of the engines, the ceaseless sea; the interaction with Alarm Phone, the songs of fishermen; reflections around the event, and the sound of a marble block disappearing into the waters. Every night live guests now enter this metaphorical black box, adding their reflections, poetry, or artistic interventions. The Journey creates an incredibly powerful imaginative space, taking listeners on an expedition of sound in the Mediterranean, where one can have audible encounters with that which is normally invisible.

You can have a look at the pictures of the performance The Journey, listen to the sound archive The Sonic Diary, and read the interview with Rossella Biscotti (in English).

In 2010 I was awarded a 20-ton block of marble from the Michelangelo quarry in Carrara (Italy). Exactly one year ago, this rock was extracted, transported to the coast and loaded onto a boat. The boat then set sail for three days on a symbolic route between Italy, Malta, Tunisia and Libya and finally at a set point releasing the 20 ton marble block into the Mediterranean Sea. The route carefully plotted and followed on GPS, was designed to highlight and identify points of interest in the Mediterranean – a 1710 meter deep geological rift, several arbitrary nautical borders demarcating oil and gas concessions, areas of military operations, or even the migration path of a sea-turtle as it crosses the patrolling lines of the European Border Agency FRONTEX. This performance, invisible to a general public, was my contribution to last year’s edition of Kunstenfestivaldesarts.

While sailing, I began to think of the ship as an ear, capable of capturing reality both above and under the salty sea, catching sound frequencies, extending their acoustic range all the way to the Tunisian or Libyan coasts, traversing time and connecting different areas and points through sound waves. The sound recorded on this journey beginning with the extraction of the marble, then along the shores of Malta and Tunisia finally leading to a location in the middle of the sea, is the starting point of the immersive eight channel sonic composition presented here. It includes the hum of engines; the ceaseless sea churn; the songs of seafarers and fishermen; the unique rhythmic matrix and resonances from ancient amphorae. We re-recorded the historical boat distress drum beats on a percussion instrument and edited them to accompany the words of Chamseddine Marzoug as he describes the bodies he found in the water or swept on the shore. We had recorded Marzoug in a bleak desert landscape, a landfill where he had buried all the bodies he found, in the background the sound of a banging fence by fortuitous accident shares the same frequencies of the percussive distress patterns we had recorded- both signals become indistinguishable.

The Journey is an elaboration of this dimension of listening, recording and composing.

Every night live guests enter a metaphorical black box, adding their reflections, poetry, or artistic interventions. They offer encounters that shift the immersive soundscape into an intimate dimension; one voice, one reel, and a subjective research into the politics of visibility and invisibility.

Water reflects the sky above its surface. It however also gives testimony to the lands neighbouring it; to the atrocities taking place upon it; to the violence that doesn’t end where land drowns. Water is where human violence learns flowing, sailing, swimming and drowning; littering water bodies with human waste. Connecting different histories of human movements on water and human movements of water, Sinthujan Varatharajah explores how water bodies across our world bear witness to human violence.

Since few years Attila Faravelli is interested in capturing mono field recordings with a Nagra III reel to reel recorder. The lack of spatial information provided by mono reveals the act of recording as a series of positioned and relative choices. In his performance for The Journey, some of the material that was collected for the installation is played in their original isolated form, the way they were collected, before being arranged in a counterpoint of many sounds.

Perhaps some bodies are the cogs in a great machine. Perhaps it’s the macabre factory of fragmented humanity. Perhaps you have to die with your skin puffed up by the salt of the sea to be granted a certain humanity. Perhaps… maybe the questions aren’t enough. Perhaps we won’t stop asking them. Putting them there. With or without a bang. As ostentatious as an orange dinghy lost on a broken radar. Joëlle Sambi is a poet, author and performer and together with sound designer Nicolas Pommier she offers a sonic slam that questions our humanity which withers to the rhythm of the inhuman migration policy of Europe.

The ability to sense each other and the world at a distance is what, today, we could call telepathy, an experience that the internet has rendered increasingly palpable for the modern human. But, is digital technology the only form of telepathy there is? What other networks, human and non-human, sustain the sensing web of the world? Through the performative lecture when technology becomes a ruin on the ocean floor, Juan Pablo Pacheco Bejarano will propose a set of speculative associations between the internet, colonialism, minerals and water, seeking to expand on the entangled role that the ocean plays in the history of infrastructural networks.

Production: Rossella Biscotti, Kunstenfestivaldesarts | In collaboration with: 8th edition of Dream City Festival | Within the framework of the project Between Land and Sea, Bozar
Performance at sea has been produced in collaboration with Blitz Valletta
Project supported by Mondriaan Fonds 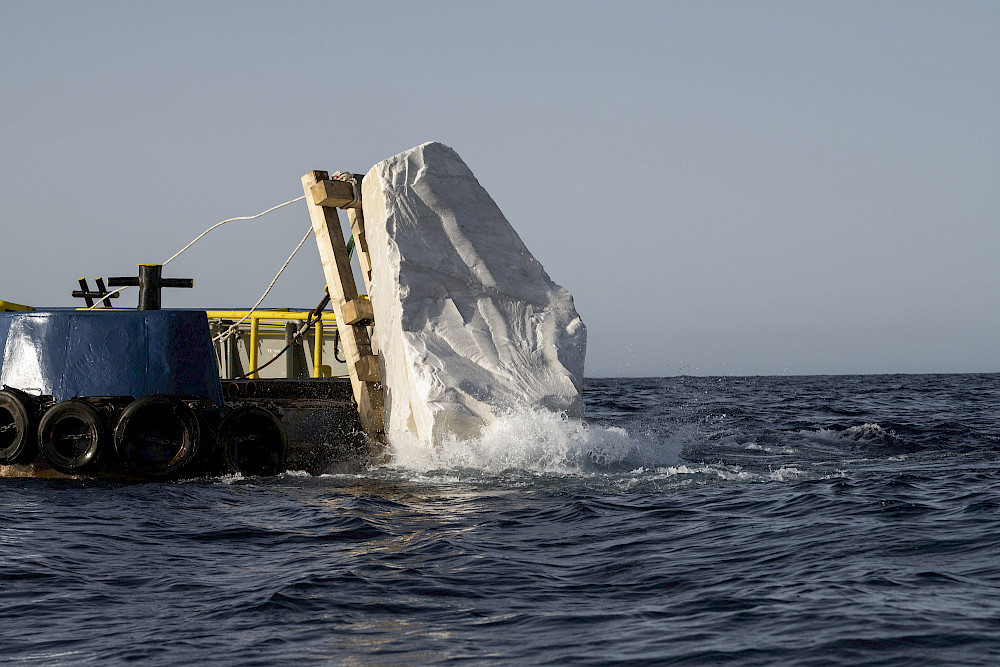