In her new creation, Cherish Menzo and her onstage partner Camilo Mejía Cortés look for ways to detach their bodies from the way they are perceived and the daily reality in which they move. Among other things, they look up to the sky, at dark matter and at black holes that meet and collide to give birth to a new, (afro)futuristic and enigmatic body. MATTER wants to get rid of the biased way of looking at one’s own body, at that of the other, and at the stories we attribute to them. Together, they throw their bodies into a complex conversation that they want to both enter into and transcend – a duality that feeds the performance. Just as in her previous project, JEZEBEL, Menzo stretches her movement language further by integrating techniques from hip-hop music. She applies the Chopped and Screwed method to her movement language, a process in which the music’s tempo is sharply reduced. By stretching the notions of time, the register changes and the performing body manages to generate new readings. A ten-piece choir – the Distorted Rap Choir – creates a recorded soundtrack of alienating rap anthems to accompany the two performers on stage. MATTER wants to bring about a thorough reshuffle of the atoms, looking for a new form for – and way of looking at – the (black) body and the complex outside world to which it relates.

Bringing dark matters to the surface

Elisa Liepsch: Hip Hop music is a recurring element in your performances. In your last work JEZEBEL you were looking at images of the Video Vixen and worked with the de- and acceleration of speeds within rap music. In MATTER you work with Chopped and Screwed, a method in which the tempo of the music is radically slowed down and the song finally sounds “chopped”. Which role does the deconstruction of sound play in your work?

Cherish Menzo: I guess, it’s less about deconstructing rather than distorting – which provokes a lot in my imagination. And how special the Chopped and Screwed is and a certain idea of “the origin” gets distorted and creates new possibilities. Not only the music but also text – the overarticulation or how the voice becomes super pitched down. This provokes a sort of embodiment, it fills up the body in a certain way, and brings a playground or possibility for new readings of the body, new forms and qualities of movement. And I’m also just a sucker for sound and music.

You are continuing with the research on stereotypes, assumptions and projections on the black body and want to detach the body of Camilo Mejía Cortés, your partner on stage, and your own from imposed perceptions. To which gazes and perceptions are you referring?

I think it’s a lot about a perception of ourselves. When certain stereo- or archetypes, even clichés or collective narratives are being reproduced we relate to certain images and bodies in a specific way. And there is not just one gaze but several gazes that can perpetuate or want to define what the black body is. Here I’m interested in how to transcend those stereotypes and find our own agencies and empower-
ment. I’m really searching if there is the space to be freed from those gazes, and especially also my own.

Can you share with us some aspects of the rehearsal process and how you are doing the movement research together with Camilo Mejía Cortés?

We are constantly searching how to throw ourselves a bit off the familiar in the movements, trying to rediscover something – also in relation to the post-human. What are the boundaries and limits of the bodies? And how can we go over them? Does it mean searching for exhaustion in the body? I think it’s really about not imposing movement but navigating what the embodiment of the Chopped and Screwed could mean. One element is stopped time. Another element is scratching. Here I really try to get a visualization of the turntable. What if you really would go back and forth, thinking of the needle, scratching on the final record? It’s about distorting the movement and that there’s no beginning or end of where the movement is. I’m interested in what kind of performativity that brings.

Some of your references are Afrofuturism and posthumanism. Afrofuturism relates to ideas of imagining and fantasizing on Black futures through speculative or science fiction and technology while decentralizing the human. How is the potential of dreaming entering your work and which future are you imagining? Which role does the more-than-human play in relation to the black body? And where does the dark matter come into play?

First, MATTER was a lot related to my body entering the black box space of a theatre and how much I feel the connotations, associations and perceptions that I don’t really manage to just easily push aside. I was and still am wondering can I freely consider this body as a potential, detached from all the labels mentioned above? Can this potentiality then lead to imagining a transformation or future for that body, which is a black body. Also literally the astronomic element itself – dark matter. I find it interesting how dark matter very much relates to a lack of optical perception, a lack of light, a lack of reason, and how this lack of knowing and understanding provokes speculation. Can this become an engine or strategy to create or reinforce this notion of potentiality matters that are placed in or considered as dark? The black body is sometimes placed in the dark. It’s about how these dark matters can be brought to the surface.

Referring to Afrofuturism, we as individuals can speculate or dream about the Afrofuture, there are tons of possibilities. The consideration or acknowledgment of human in relationship to the black body has been a complex reality. There’s a lot of friction for me with post-humanism and the black body, which brought me to spirituality actually. While I look at a lot of the spiritual practices of African and Afrodiasporic cultures, there is in some way an element of human for me. Human or body is not per se considered as the centre of importance. It rather coexists, sometimes even in the surface of other elements. Winti, an Afro-Surinamese spiritual practice is a matter that had to go underground in order to survive and be sustained in colonial times. It’s something that became taboo, and pushed aside, and perhaps considered as a dark matter. Spirituality transcends the purely physical and I see it as a form of post-humanism.

One of the central images of Afrofuturism is the space-ship. The idea of the ship is very much affiliated to Black survival. When I think of the spaceship I also think of the slaveship and the relation the notion of the ship entails towards erased pasts and the afterlives of slavery – in relation to space. And we remember Sun Ra’s Space is the place that is very much connected to different understandings of space politics and sonic futures. Which role does space play in MATTER and which space of Black futurity do you imagine?

I really feel that space becomes several things. One is the space above us, the cosmos. But how about the body being a space? In relation to spaceships and slaveships, I think of the Middle Passage and Drexciya, the music duo from Detroit that created the myth how the children of the pregnant, enslaved women that were thrown off the ships were born and invented their own reality under water. Afrofuturism makes this pinpoint with the past, also the present, and maybe not the future, but rather with a potential. And I really like that. Because this potentiality brings a lot of the imagination and dreaming, and how that can be already now, it doesn’t have to be in the year 2000 or 3000. I’m trying to create my own futuristic potential with MATTER. Now.

Afrofuturism is all about Black community. Do you want to create community by working with the Distorted Rap Choir in MATTER? Which process are you initiating with the newly-formed choirs in each city?

With JEZEBEL I was alone on stage, and the question of representation became very important to me during the creation. There I took a certain audience for granted – that is dominantly white and has more access to theatre. But the hip hop elements, the Video Vixen and all those different references made me think – how do audiences that watched as much MTV as I did or identify themselves with the images and references relate to this work, are they even actually in the audience? Do they feel invited? And that lead me to bring these questions to my artistic development and creations. To see how this maybe could resonate and who feels invited and is given access to be in the audience. This is also reflected in the Distorted Rap Choir trajectory which runs parallel to the performance. At each new venue the production travels to, a dozen local people of colour are invited to take part in lab-workshops in which we work around the themes within MATTER. Together with them and the presenting partners I want to start a constructive dialogue on creative processes in the performing arts. On how to open them up to people of colour in a better way, striving for better representation. My team and I wrote a rap anthem which each choir records at the end of the lab / workshop. This audio recording is integrated into the performance and at each new location a local choir, and thus a new layer, is added. I want to docu-ment this exchange process and share it with the public via an online platform 1 on which the choir participants are visible and all recordings can be heard. We have material that we share. That brings us together.

1 The choir can be seen and heard on distortedrapchoir.com

Residencies: Productiehuis Theater Rotterdam, STUK, La Villette, Frascati, Beursschouwburg, CCN-Ballet national of Marseille in the frame-work of the studio reception / Ministry of Culture | In collaboration with: Trill, WijzijnDOX | With the financial support of: the Flemish Government, The Performing Arts Fund NL, Ammodo, the Taxshelter of the Belgian Federal Government, Cronos Invest 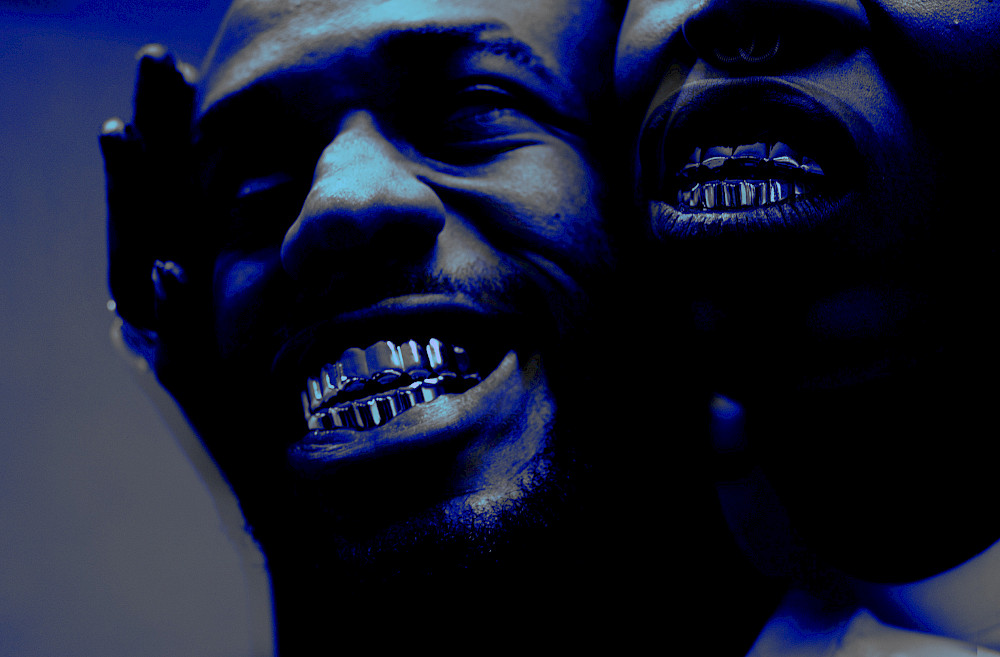