Frontera I Border – A Living Monument

Frontera I Border – a Living Monument by the Mexican-Chilean choreographer Amanda Piña has its roots in a dance that emerged from the neighbourhood of El Ejido Veinte of Matamoros, Tamaulipas, on the border between Mexico and the United States, and is performed by young people at risk from the extremely violent environment associated with this liminal space, a place where drug trafficking, militarisation and an industry around cheap labour prosper. The dance that inspired Amanda Piña was originally devised by the Spanish and depicts the Christian victory over the Moors. During Latin America’s colonisation it became a racist propaganda tool. The difference between white and non-white was then exported, with indigenous poeple forced to personify the “Moor” and the Christian representing Spain. The dance continued to evolve and became seen as a form of resistance to colonial and, later, neoliberal forces. By exploring a choreography of borders in which hip-hop culture, colonial tales, native practices and mysticism intertwine, Amanda Piña also reminds us that the border is not only a place but is also inscribed in the bodies, contributing to their process of racialisation. Thus the bodies themselves carry these frontiers with them – some more than others.

The following texts are a multitude of voices and perspectives referring to Frontera / Border, a texture that accentuates the complex constellations of the theatrical and the political in our society and the togetherness of the aesthetical and the ethical in a performative world. The texts will be compiled in a publication titled Endangered Human Movements Vol. 4. Danza y Frontera, to be published in fall 2021

1. Geopolitics of the Body in Choreography Corporeal Frontiers and Border Corporealities

The first time I heard about the M20 group was in 2010 while browsing social networks. At first it seemed like a media phenomenon that tried to appropriate YouTube and Facebook with that martial, acrobatic and to some extent erotic character that emanated from their bodies. The vitality, the outpouring of the masculine and the vibrating energy of his drums, immediately invited me to move and pro-mise me one day to dance alongside Rigo. […] The sense of complicity, companionship and brotherhood make dance become a space for mobilization and honest exchange of affections between men; where the body uses a series of subtleties such as double meaning puns, soccer matches or expressions of encouragement to continue dancing after hours, putting a policy of care beforehand that contrasts with the rough appearance of its members.

Throughout my practice as a performer and choreographer, I’ve been on the research to expand the territories of my own body and question the historical, cultural, and episte-mic frontiers enrolled and imposed by modern thinking and its notions of identity over the bodies.

The identity’s colonial modern project has been sustained by a series of practices directed to the production of the I through the discipline, territorialization, and improvement of the body’s know-how. Under this thinking, we are what we make and what we know how to make with the body; either we are farmers or dancers while we form and train our bodies to do so, but we are not anything that is not inscribed in the body as an experience. With the above, I pose that the modern notion of identity is constructed mainly from the idea of being as the only way to enunciate us in the world, leaving behind the experience of to be in other bodies, actuating multiple stages of our subjectivity from there.

In my own experience, as an artist of indigenous origins, queer, mainly formed in the dance language of folkloric Mexican dance and with a continuous approach to ancestral dances aside from other movement techniques, I dare to affirm that all limits apparently sketched between our bodily territories and identities are potentially expandable and questionable when we are far from ourselves.

[…] As a performer, I think it is important to highlight that Matlachines’ Dance corporeality proposes us to inhabit a liminal zone (frontier) that questions from the start the binary relation of domination / submission established by the colonial thinking. Opposed to the common understanding of the attitudes and postures present in several indigenous dances, where the body could appear contracted and bowed at first sight – an image that would complement the discourse incarnated in the conquistador’s pose –, there is a great amount of energy and tension contained in the body that are distributed mostly to the core, very similar to a sensation of courage that flows through the muscles of the abdomen and pelvis that is released continuously through the firm stomping and the effusive sound of the rattle.

As a “cultural souvenir” from the Conquistadors, the trope Danza de moros y cristianos spread and circulated in the brutally suppressed Mexican empire under Charles V. The Habsburg collective trauma owing to the Islamic “Moors” on the Iberian Peninsula is reflected in this parodistic Danza de moros y cristianos – a choreographic arrangement where Christians fight against Arabs. The great performative format of the fiesta Danza de moros y cristianos and its smaller version, danza, staging the Reconquista in Europe – are brought into the New World as promising interdisciplinary (re-enactment) models to subject local “heathens” and to urge their conversion.

The function of these dances is based on: 1. the legitimization of Christianization through allegedly equitable combat, 2. military exercitation, and 3. the display of technological superiority on the part of the colonizers. Primarily, I would like to talk about the specific shaping of the Danza de los matlachines performed in the border region of Northern Mexico 1, and resonating in Rodrigo de la Torre’s contemporary choreographic work.

The original cast of the Matlachines consists of the Monarca (Moctezuma), the Malinche (translator and the Indian mistress of Hernán Cortés, repeatedly reinterpreted into wife / daughter of Moctezuma), the Abuelo (ancestor), the bull (representation of Cortés and Europe) and 10 to 14 danzantes. These performers are arranged in two competing groups (indigenous ‘infidels’ and Catholic Christians), wearing costumes made out of a variety of colorful ribbons and headdresses, gourd rattle, as well as a three-forked wooden fan (palma). In a last fight with the bull, “Good” triumphs over “Evil”, and in the end, Moctezuma and the indigenous people Catholicize. The Matlachines is the danza de conquista, and is still performed by the Spanish and indigenous community for festivities. Why?

The popular indigenous version acquires the Matlachines and supplements it with a specific version of the myth: here, Moctezuma resurrects with his companions as messianic ghost warriors, and with Malinche – now recoded as his consort – they free the Americas in a future reconquest from the chains of the colonizing powers.

3. Decolonial Aesthesis the border and Masculinity

The question that presents itself with Danza y Frontera is how this masculinity is produced at the border under a raw para-legal capitalist system. Because drug cartels are not just a deviance from social processes, drug cartels are a functioning part of the capitalist system. We could say that they are an extreme, that they represent capitalism taken to the extreme; that is, following the neoliberal dictum: capitalism without regulation. The drug business is comparable to the oil industry in terms of money and finances.

In the dancing at the border we encounter a powerful contestation to this condition of oppression of being subjectivized by violence. The dances at the border enact a powerful reply to these conditions. They contest and produce a tension with and against the order imposed by the paralegal capitalist / patriarchal system. They enact a reply that in some dimensions is decolonial and in others is not. It is a dancing reaching the enfleshed body under the embodiment of capital.

Indigenous roots, narco poetics and mestizaje in the dance from the borderlines, (About the fourth volume of the Endangered Human Movements research)

In Danza y Frontera the act of co-existence of Indigenous and Western concepts of dance is also implied to the re-contextualization of the Danza de Matamoros. Staged in relation to the migration movements of racialized peoples towards the so-called global north, the once Conquest Dance in which Indigenous functions survived historically assimilated and disguised in the new imposed order, became the dance of the youth living in the precarious and marginalized context of a working-class at the border between Mexico and the U.S.

Through a collaboration with the dancers of Matamoros, Danza y Frontera in its versions for the theatre, the museum and the one commissioned by Kunstenfestivaldesarts titled Frontera / Border, A living Monument, become a dance and a manifesto about people who dare to cross borders escaping from or searching for certain living conditions in which to exist. The uprooted dance becomes the dance of a new territory to be claimed by the dancing bodies of border subjects; the exclusive territories of Fortress Europe. 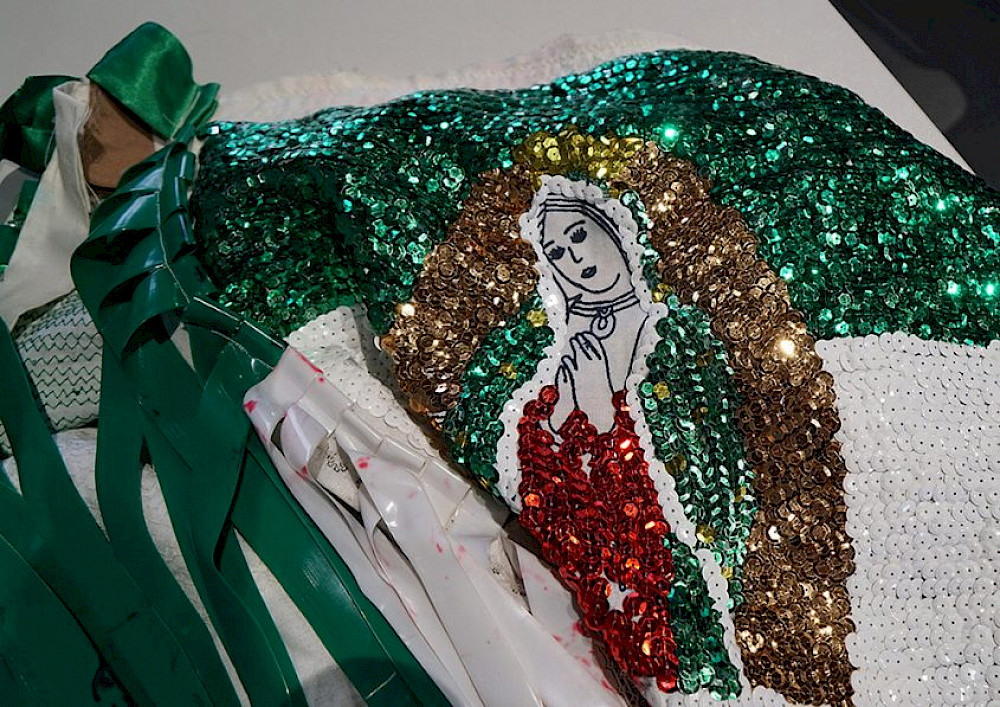 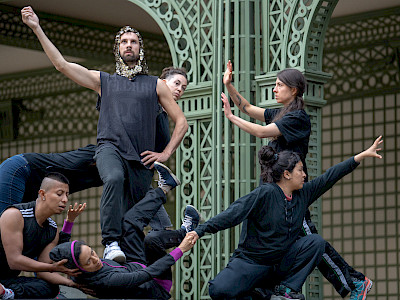 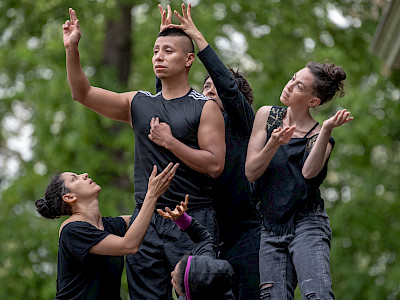 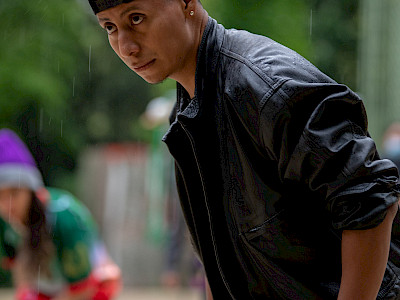 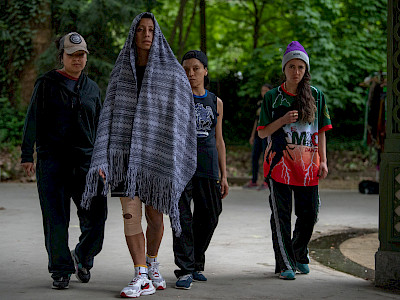 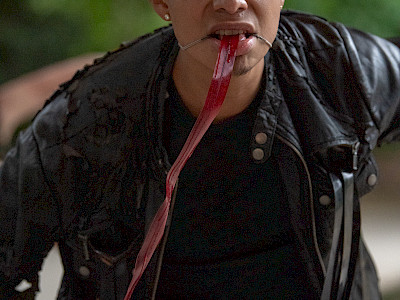 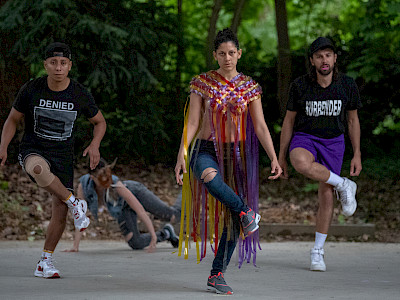 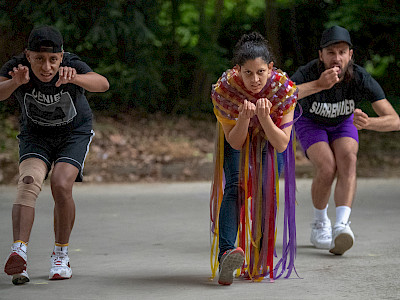 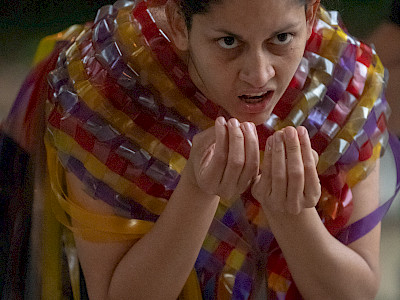 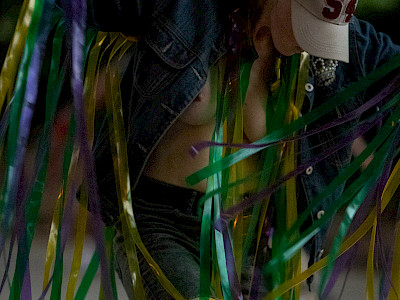 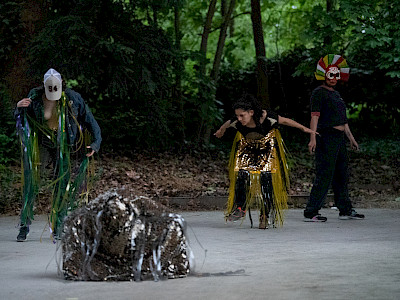 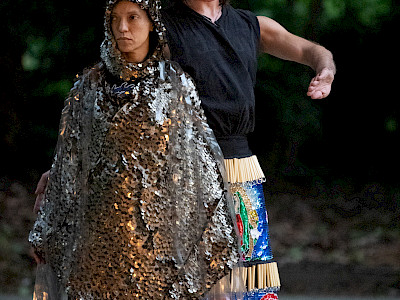 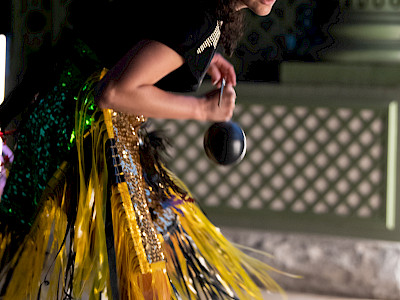 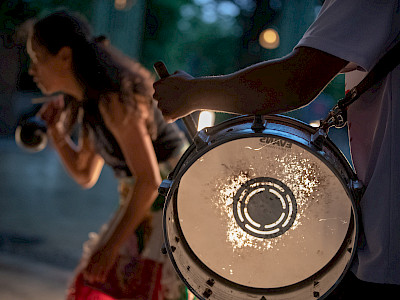 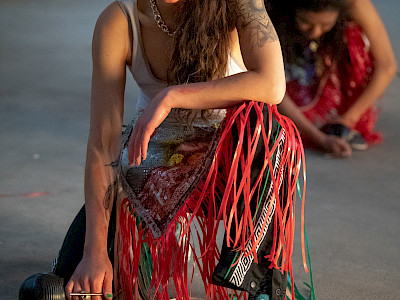 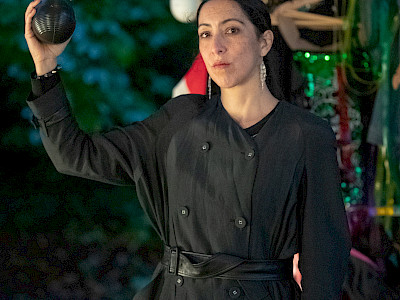 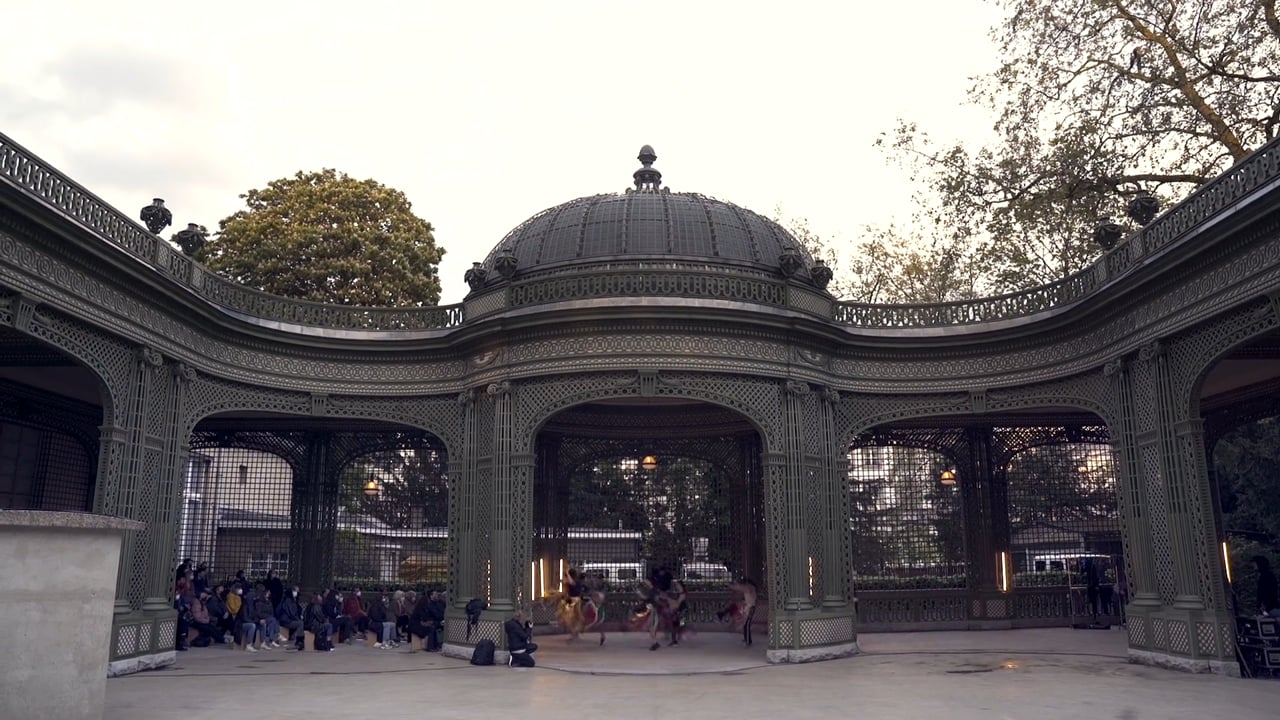 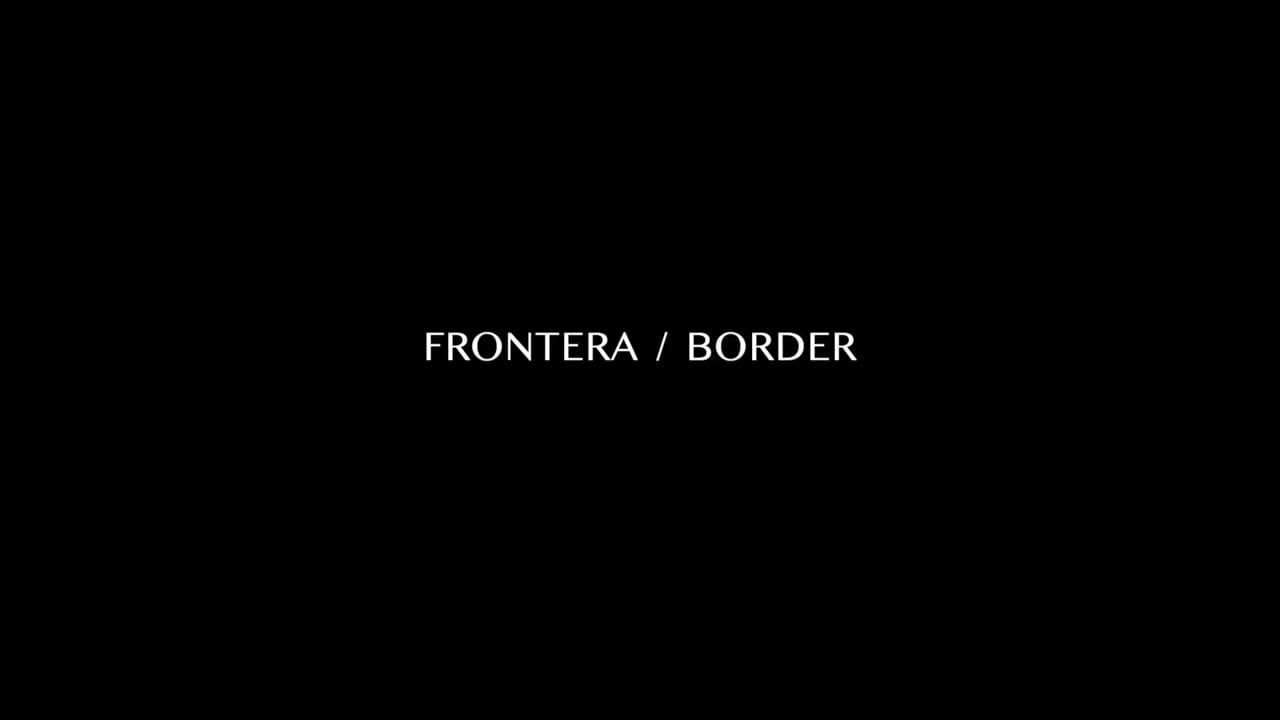 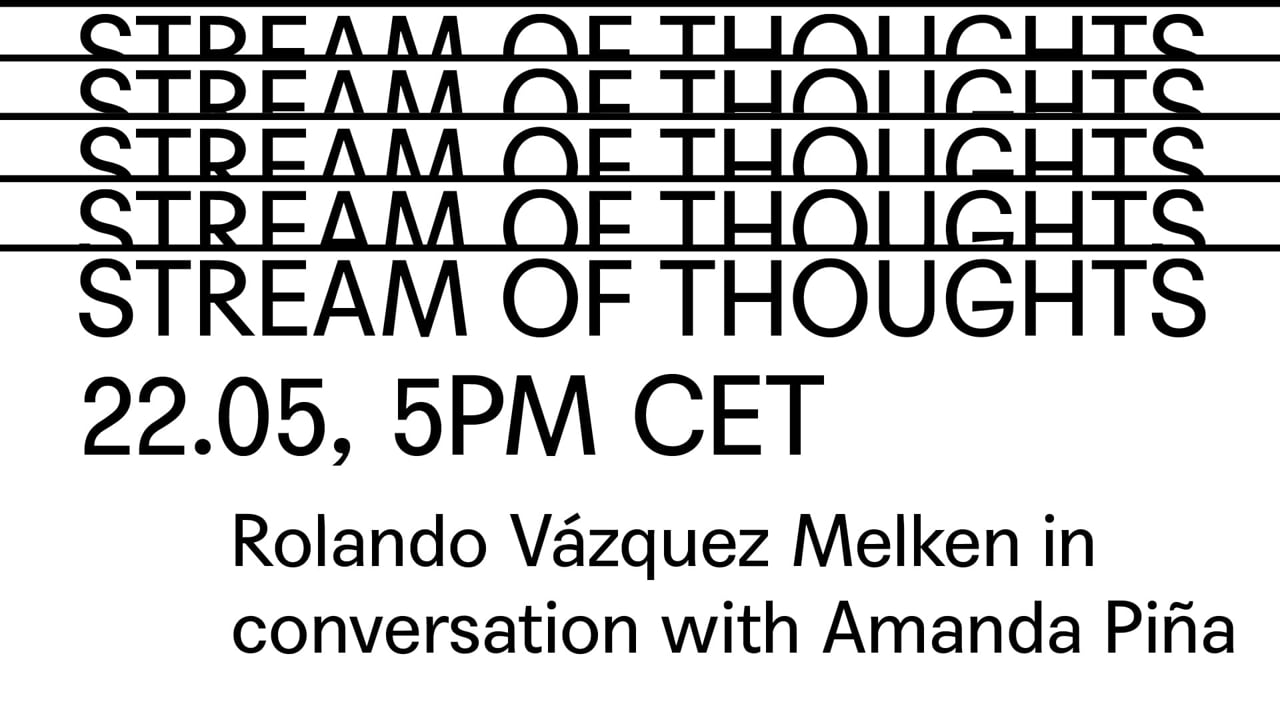