The new site-specific work of Romeo Castellucci is constructed on nine principles. “01. The action requires the participation of about forty men. 02. They are not actors, but protagonists of the scene. 03. There are no rehearsals. 04. Each of them is given a policeman’s uniform and a pair of invisible headphones. 05. Each of them receives, in real time, specific individual commands. 06. Each policeman must fulfil the order received. 07. No improvisation is requested from the policemen, but the abyss of an absolute present. 08. The policeman and the actor are one and the same thing. 09. The action takes place during the night, in the city center of Brussels”. Conceived for the festival, Buster takes place on the Esplanade de la Cité administrative, between the federal police headquarters and Saint Michael and Saint Gudula Cathedral, and with the city as a background of its actions. A reflection on the law, the violence, and the comedy, on the role of actors who lend their bodies to actions that are not theirs.

Buster has moved all but unnoticed into the city, occupying the Esplanade de la Cité Administrative, between the Federal Police Headquarters and St Michael and St Gudula Cathedral. This is the first time you have conceived an action in a public space.
Buster has to do with the police. Since it takes place in front of the central building of the Brussels Police Station, the mimesis could not be more pronounced. Writing the actions of policemen on the surface of the city, on the scene of an alleged crime, makes this mirroring effect all the more glaring. It creates a powerful overlap, that disorients us and heightens the mimesis.

One might easily think that the handful of police officers now crossing the Esplanade just came out of the Police Station.

This space is taken as a found environment, including its system of signs and its topographic features. The skyline, with its profile extending as far as the eye can see in the urban space of the Esplanade, is a synecdoche of the entire city. Theatre leaves the stage and inhabits the city, calling on an emblematic topos, the night. This is a direct, affirmative occupation of space: leaving the place intended for representation, one discovers the essence of theatre, outside theatre, in the heart of a Naked City.

What motivates the presence of this handful of policemen?
The policemen blend into the night. They become an eerie, ghostly presence. The surprising thing is the lack of any criminal action. The police seem to move around a void. One might imagine a thriller, but with no actual crime. An unnamed threat hovers in the air. The driving force behind the deployment of this armed corps is not present as part of a linear narrative. Rather, it involves a latency with a nocturnal, perturbing side. One could say that the presence of the police prepares the scene of the crime. The policemen are called on for a presumed crime that coincides with the law itself, a tautological crime.

Something interferes with the codes, that are no longer logical or moral. Sequences take shape whose combination leads to dead ends. These are missing acts, as in a story that while developing falls apart into elementary patterns of action. A heart of darkness envelops the figures, forming relations that overlap and give way to several possible plots, but no narration is brought together in a story.

The group of policemen is numerically balanced by the spectators, with almost the same amount of each…
The policemen come like a wave, dressed in black, armed, with batons and dogs. Some collective moments show bonds of brotherhood, in belonging to a larger body and in the extraordinary power of uniforms. We witness the ritual of dressing in uniform, an initiation. Something veers towards an esoteric sense. It is an investiture, through which one becomes part of the clan. Despite this tension, paradoxical situations arise that come close to comedy. It is no coincidence that the police is one of the first subjects in the history of film. Policemen were constantly seen as supporting actors in early popular cinema, especially comedies, linked to chaos, havoc and confusion. In Buster Keaton’s films the policemen, instead of being guardians of order, actively guarantee disorder. In Buster, comedy leaves traces of uneasiness, minimal events that are grafted onto an alarming background.

Gags and the police are inexorably tied to the history of cinema. In Buster, is this world referenced by microscopic comic failures, as a source of disturbance? Do they serve to alter the norm by showing its authoritarian side?
In comedy sketches, a gag was originally a small blade put into the mouths in order to prevent from speaking correctly. It broke apart syntax, making the voice stumble and introducing small fractures in speech. The gag is an instrument of linguistic stumbling, its function is to deregulate habit and replace it with disorder. It has to do with the law and the power of violation. There is an anarchic side to comedy, that opposes the law: the comic, as the hardcore of the law.

Comic situations have a duplicity that becomes perturbing. One laughs at impairments and victims. Here, however, policemen are also the ones subjected to the law. So there are victims on both sides, since the police themselves are victims of the commands they continually receive from invisible earpieces, from which they have no escape.

The interpreters in Buster were not chosen through a casting, they come from the street, after responding to an open call. They inhabit the scene without rehearsals, they have not learned a role “to play”, they learn it while obeying orders given through small earphones.
The interpreters – citizens of Brussels – agree to a protocol, to “become policemen”. They make a sort of oath, accept a list of conditions and submit to their orders. Their task is to execute a dense series of commands without wavering. And, inevitably, their orders procure the necessary disorder. There is no room for conscious thought here, nor for choice. There is no time. They must obey immediately, without thinking. Time is compressed into an absolute present, an abyss where only the command and its instantaneous fulfilment exist. These are pseudo-actors and, as such, the only protagonists.

The actor and the action are one and the same thing, they overlap. This is a way of doing away with the concept of identification in acting, which now consists simply in one’s own actions, precisely because there is no room and no time for psychology. The policemen are taken off guardless and relieved of their responsibility. They don’t know what they are doing, like the Soldiers of Jesus, they just do it.

In this procedure, and in the fault lines it produces, the dark heart of the law is revealed, along with its ancient function: to ensure that crime prepares for its coming. 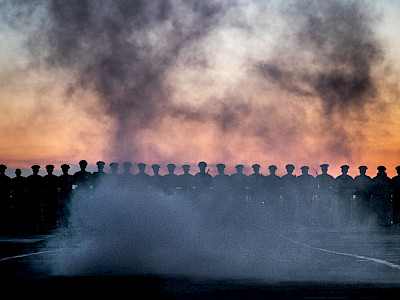 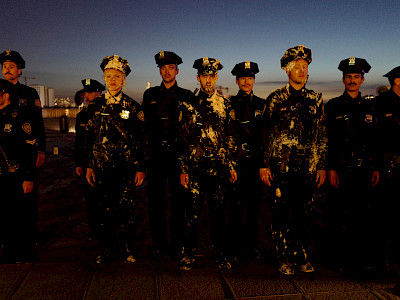 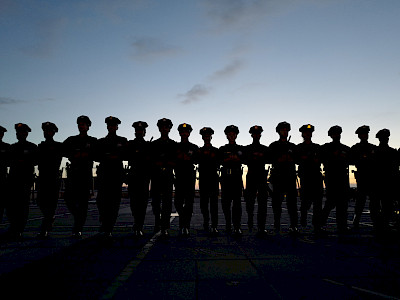 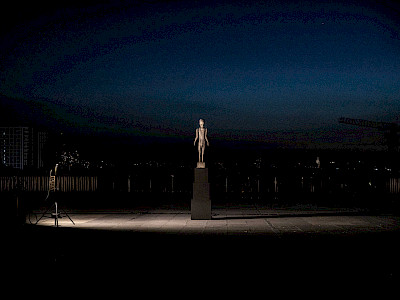 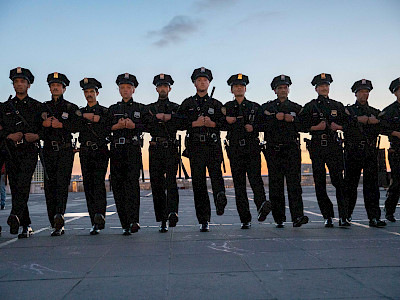 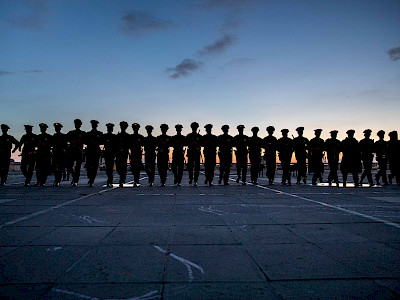 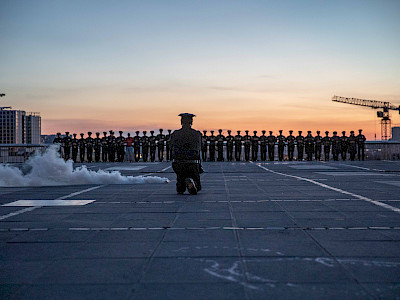 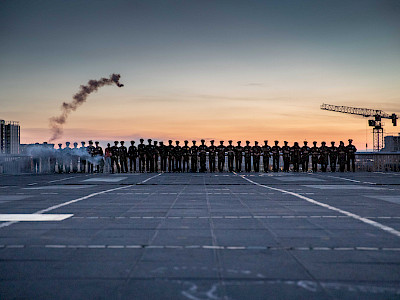 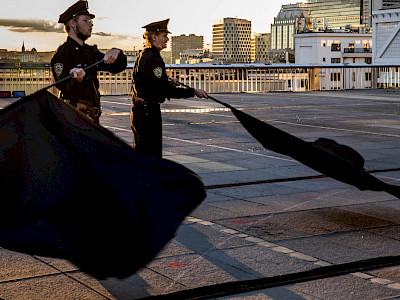 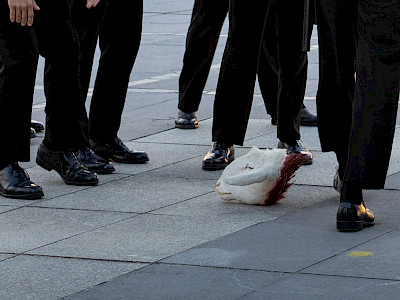 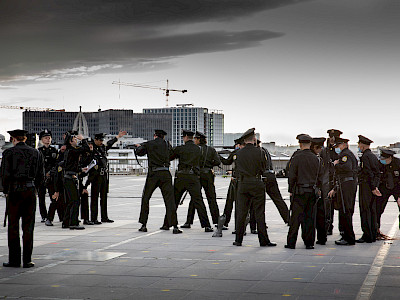 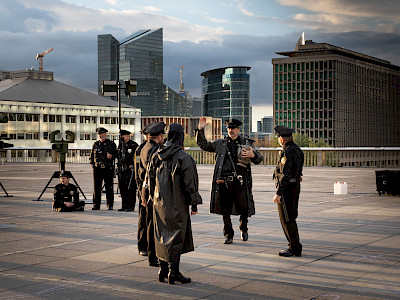