An all-girls classroom, several desks, a blackboard. Mahoor, a 16-year-old girl who just moved to Tehran in the middle of the semester, enters this new school and forms a deep and intimate friendship with the best student of the class. They form a relationship that begins to attract a lot of attention from other students and the school board. To create this project, Parnia Shams worked with 7 girls recently out of high school. Her style is minimalist: it seems that little happens, but everything is in the details. We see them in class talking to each other, about the forbidden books hidden in their backpack, and weaving a story that is both everyday and exceptional. We hear the girls in conversation with the teacher or the direction of the school. These authority figures, although present, are unseen and unheard, yet we can follow the dialogues from what the girls say. است (“Is”) is thus a game of full and empty, in which one must fill in what is not said or cannot be said, and in which Parnia Shams embodies the feeling of being controlled by an invisible power. She crafts a hyperrealistc yet magical fresco depicting the importance of the school as a place of learning, not just of notions, but of sisterhood and solidarity.

است (is) is the result of an idea developed by Parnia Shams at Teheran’s Soureh University, well-known especially in the theatrical life of the city for the dynamism of its students. The artist’s initial intention (the information covered here is taken from an interview I had with Parnia Shams shortly before writing this piece) was to talk about her own experiences in girls’ schools, hence the idea of depicting the details of the everyday life of the pupils in as naturalistic a way as possible. Parnia Shams starts from an experience familiar to Iranian audiences, on which to construct a performance about the relationship between repression and the daily life of a young Iranian girl, tormented and traumatised by relentless, ever-present surveillance.

است (is) tells the story of Mahoor, a teenage girl from Rasht, a town in the north of the country, who, after her parents separate, comes to a private school in the capital. Her close bond with Negar leads to rumour and comment within the school, stigmatising the two girls as having an “abnormal”, “subversive” and “intolerable” relationship, exceeding the bounds of “an acceptable friendship for two girls”. The two friends are summoned by the headmistress, who demands they admit their fault, and dictates a statement of repentance to them. Mahoor is resigned, and gives into the headmistress’s pressure, while Negar rejects it, and is expelled.

Through this narrative framework, the drama immerses the audience in a realistic, even naturalistic and detailed performance, about the female school environment in Iran (a world hidden from the gaze of Iranian society by multiple socio-political exclusion processes), and about a world where the forces of repression and control are no longer physical or concrete: they are in the air breathed, the everyday gestures and movements made, in the most intimate of thoughts and emotions experienced by its inhabitants.

است (is) immerses its audience members completely in a paradoxical interaction between the visible and the invisible, inviting them to identify with the pupils and their lives, but also to put themselves in the place of the headmistress. The postures and words of Mahoor and Negar in the headmistress’s office seem to be addressed to the audience, just as much as they are in response to her questions. The headmistress’s office is placed front of stage, between the rectangular cube of the classroom and the stairs. While the classroom, and the life taking place there, are shown in material form, the headmistress and her space remain invisible: just as the teachers, the headmistress and her office only exist through the reactions and gestures of the pupils. In other words, what “is” (است‭, ‬“ast”, in Persian) there before the eyes of the audience members are the pupils, their life and their stories, and what, on the other hand, “is not” there (“nist” in Persian), are the forces of authority and repression, as well as their means of surveillance. These forces and their methods exist nonetheless, their invisibility giving them a metaphysical dimension on stage, and through that, both an individual and shared dimension, as they are internalised by all the pupils. In this way, they condition and control the pupils, their relationship, their speech, their gestures, and even their fate. It is to this “uncomfortable” and “paradoxical” place that the audience members are compelled to come, and while facing an experience of educational repression which they do not in principle share, are impelled to ask questions.

The play has been developed over an eight-month creative process, during which the director, together with a group of drama students, undertook an improvisation and stage composition exercise. The piece was chosen for awards at the International Festival of University Theatre in Teheran, recognised for its script, its staging, interpretation and direction. A benchmark for Iranian university theatre, this festival is known especially for being open to new experimental work, and in terms of censorship, its policy is more relaxed compared to state-run festivals. This means it can present works which address problematic, even taboo subjects, in this case an intimate relationship between two adolescent girls. 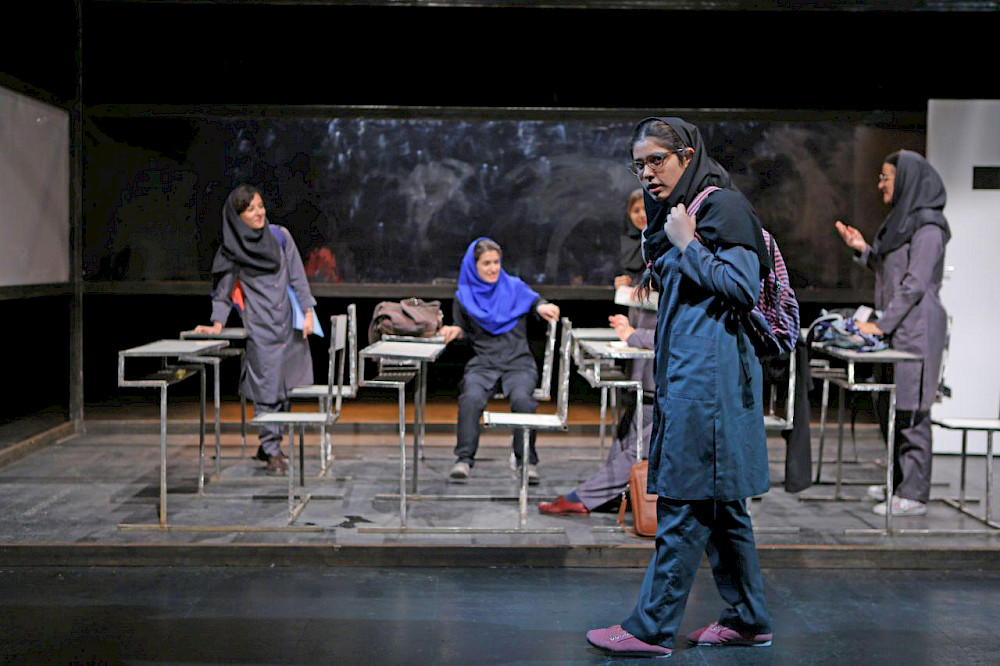 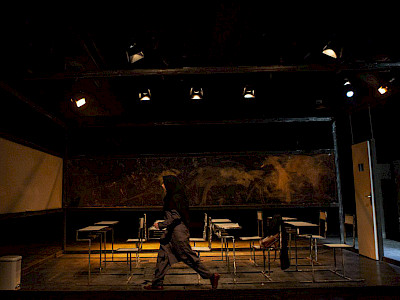 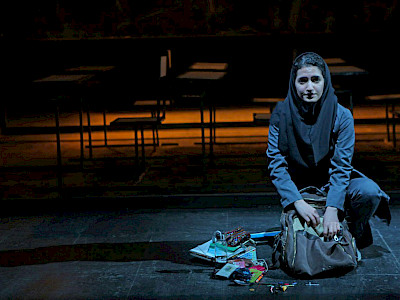 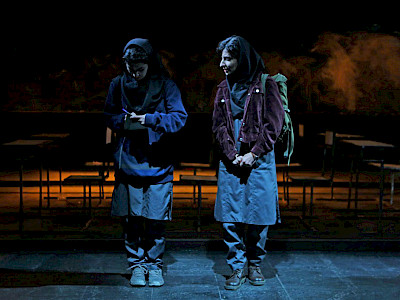