The Hamartia Trilogy: Lolling and Rolling, Cuckoo, The History of Korean Western Theatre

Since 2014, Korean artist Jaha Koo has been working on the Hamartia Trilogy, in which he focuses on how our irrevocable past leaves its mark on the future. In Cuckoo, his successful second performance, the artist engages in a dialogue with his rice cookers: in bittersweet and humorous dialogues, they go on a journey through the last two decades of Korean history. After touring the world with Cuckoo, Jaha Koo’s complete trilogy will premiere at the Kunstenfestivaldesarts. In the first part, Lolling and Rolling, he examines why many parents in Korea obsessively impose the English language on their children, to the point of having some undergo major tongue surgery to improve their pronunciation. In The History of Korean Western Theatre, the third part of the trilogy, he marvels at how Western theatre was imported into his country and was able to replace traditional theatre forms. The three performances combine to form a soothing ritual against forgetting, as Jaha Koo deciphers Korea’s lost cultural identity through personal storytelling. At this occasion he reworks this identity into a powerful total experience, between three performances and two breaks where to taste the rich culinary culture of Korea.

Lolling and Rolling, Cuckoo & The History of Korean Western Theatre

South Korean theatre maker, videographer and composer Jaha Koo will be presenting his completed Hamartia Trilogy for the first time in 2021. In Greek, hamartia means "tragic flaw or shortcoming", a concept that Koo has interwoven into completely different guises throughout his three performances Lolling and Rolling, Cuckoo and The History of Korean Western Theatre.

In the trilogy, the far-reaching imperialism of the past and present, and it’s sometimes unexpected personal impact, are the common thread. In his intelligent and haunting documentary theatre performances, Jaha Koo intertwines personal stories with historical, political and sociological facts. Often themes that entail a clash of Eastern and Western culture: from the cutting of tongue belts to make it in the West, to the heavy personal toll of Western interference in the macroeconomic field. The performances from the triptych can also be enjoyed individually.

In Lolling and Rolling (2015) for instance, Jaha Koo immersed himself in the phenomenon of tongue-tie surgery, an operation performed in South Korea to pronounce the English tip of the tongue-r. The performance thus touched upon linguistic imperialism in his native country. In 2021, Koo is revising this performance, because he no longer wants to focus solely on the linguistic aspect, which is just the tip of the iceberg. In the re-worked live performance, Jaha Koo now also highlights the more extensive process that goes with it, which tries to silence the "subaltern", the minorities. Because the denial or devaluation of a language also instigates the loss of an identity, of a minority, of a population group. In this way the subaltern are colonized not only linguistically, but also culturally.

Cuckoo (2017), the second part of the Hamartia Trilogy, examines a society under pressure as a result of far-reaching economic imperialism. In this performance, Jaha shares the scene for the first time with three non-human performers: rice cookers. The hacked, talking rice cookers – branded Cuckoo – are Koo's conversation partners in painfully funny dialogues about the lonely life that Korean youths have to contend with. Because how do you grow up in a performance-oriented and high-tech society where social isolation, youth unemployment and suicide are rampant?

The third part of the trilogy, The History of Korean Western Theatre (2020), examines the impact of theatrical imperialism, and deals with the impaired autonomous modernization because of the Western canon. Where Lolling and Rolling and Cuckoo respectively focused on the past and present of South Korea, in this final piece Jaha Koo looks resolutely to the future. Meticulously, he exposes the tragic impact of the past on our lives, unveiling the small cracks in modern Confucianism – an ideology that continues to define the moral system, way of life and social relations between generations in South Korea. With a new generation of South Koreans in mind, he attempts to break with a tradition full of self-censorship and keeping up appearances. Because only when based on an authentic version of history, he can pass on a future to the next generation.

Concept, text, direction, music, video, performance: Jaha Koo | Production: CAMPO | Coproduction: Kunstenfestivaldesarts | Many thanks to everyone involved in the creation process of the trilogy 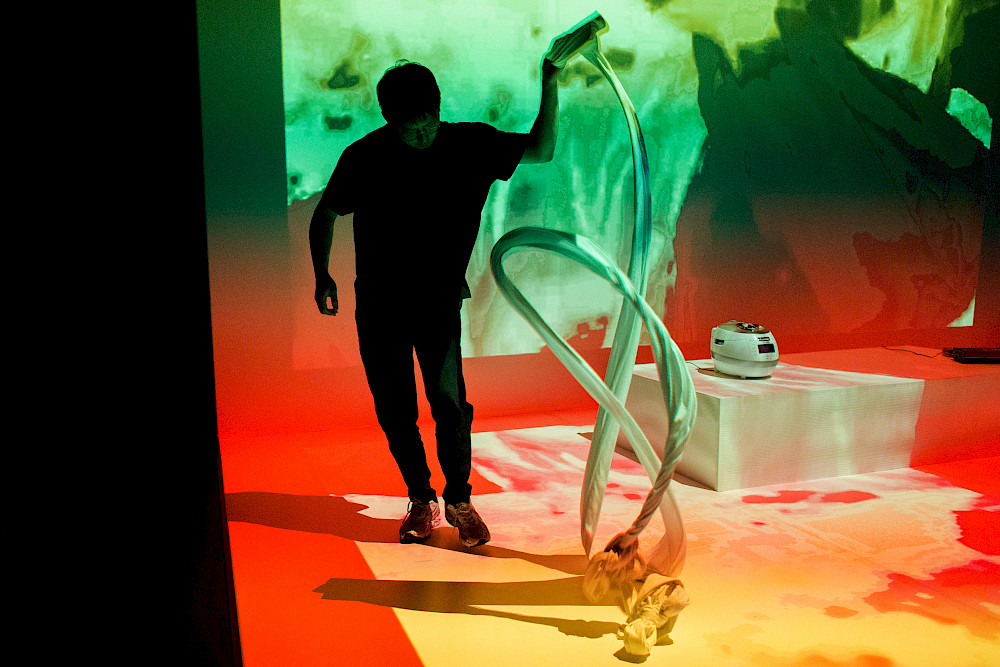 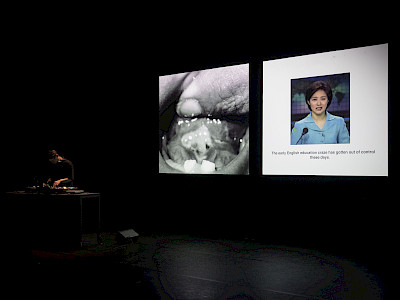 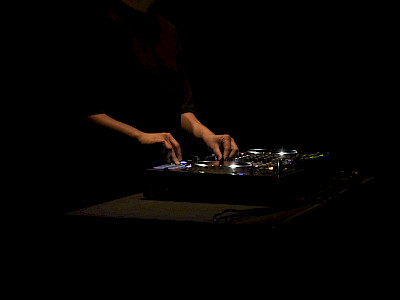 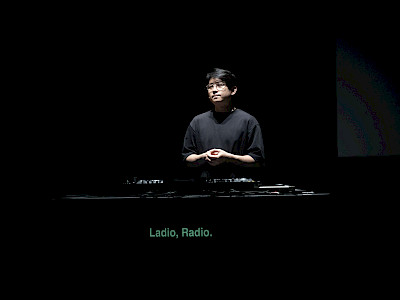 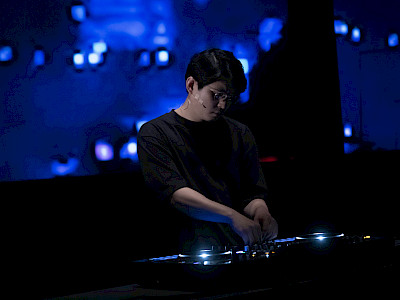 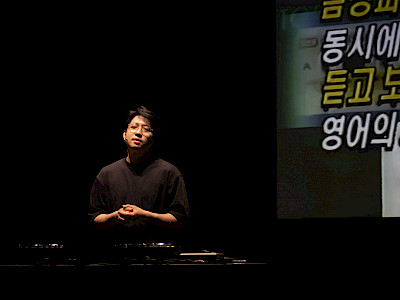 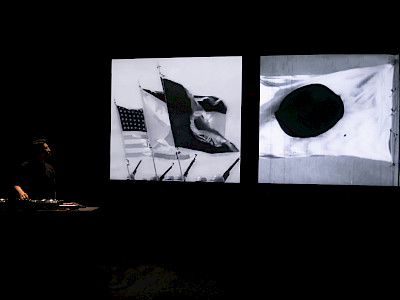 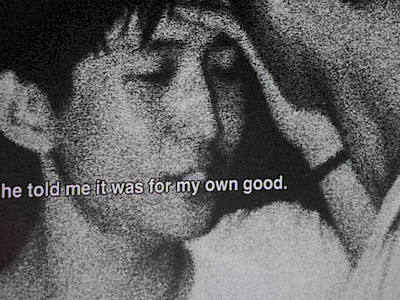 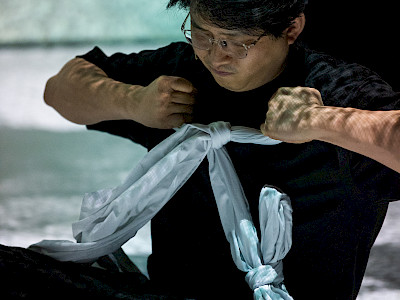 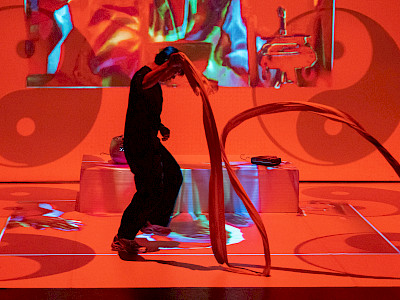 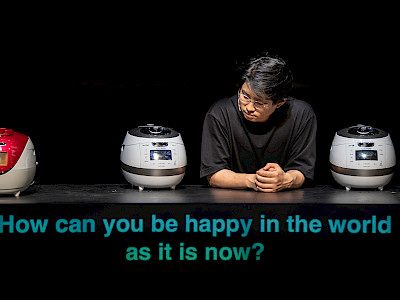 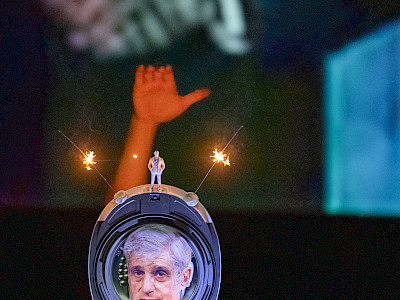 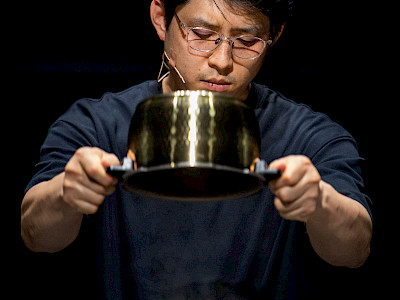 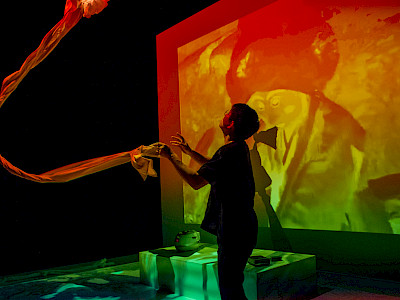 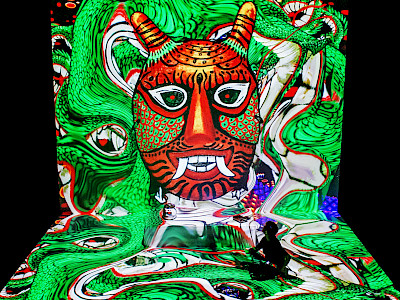 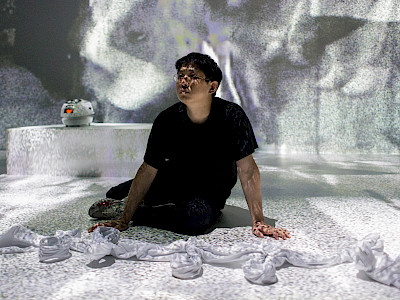 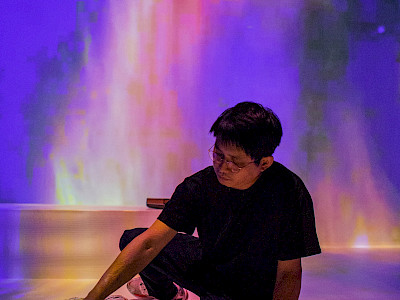 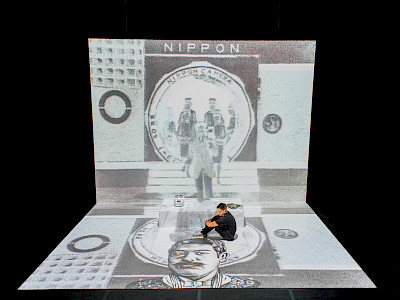 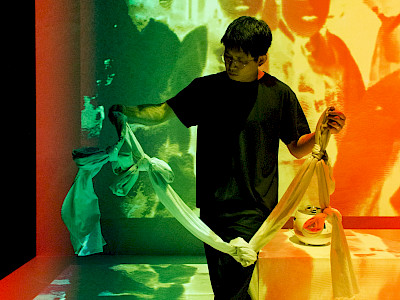 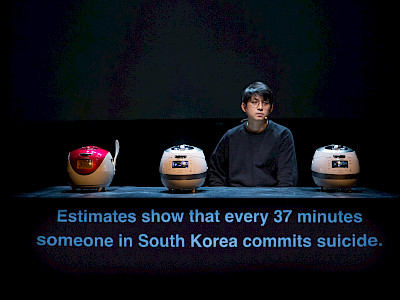 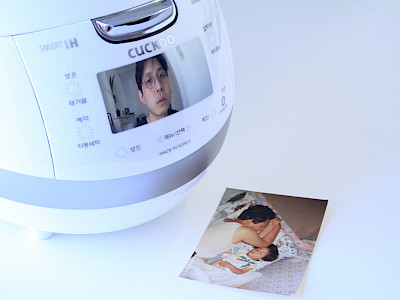 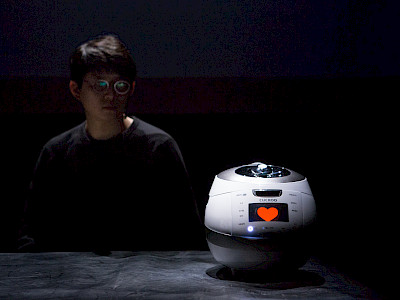 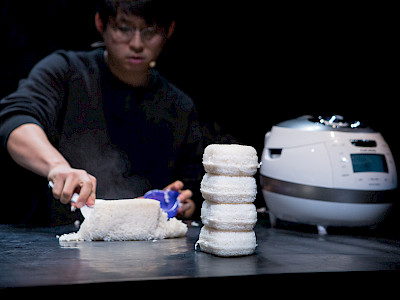 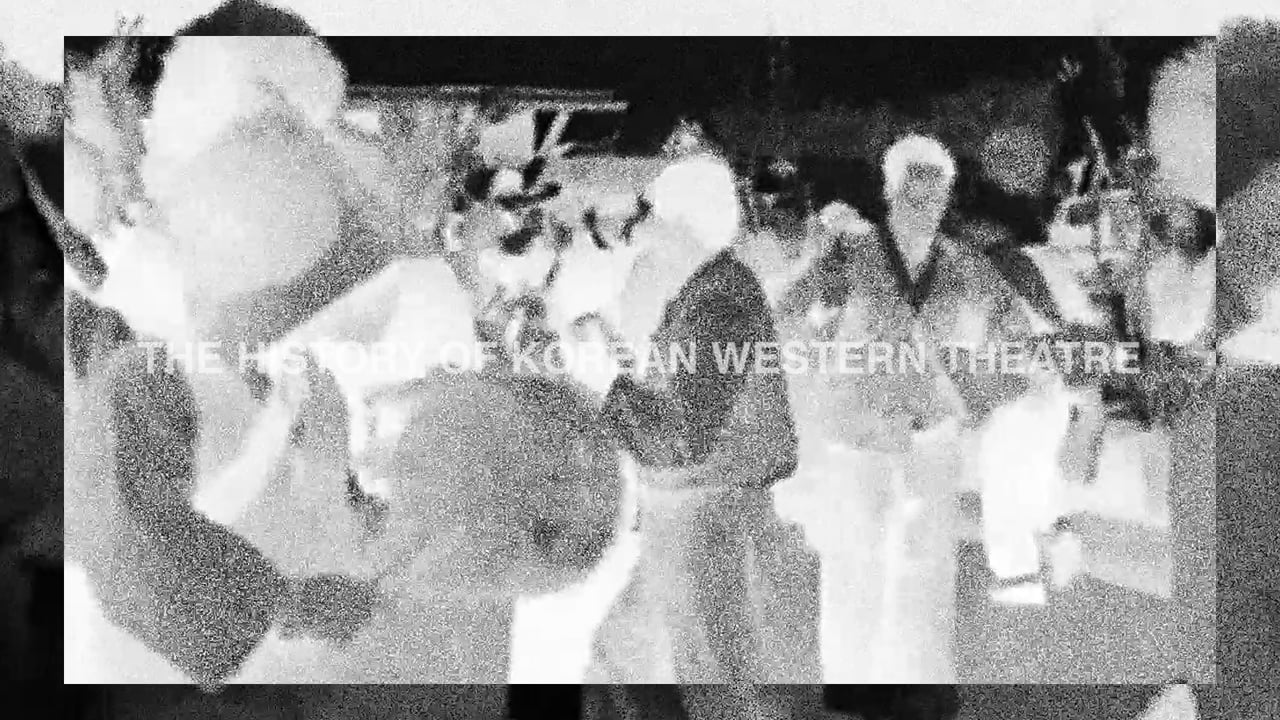