The House of Bernarda Alba

The Spanish author Federico García Lorca wrote The House of Bernarda Alba shortly before the outbreak of the Second World War. Nearly a hundred years later, American dancer and choreographer Trajal Harrell opens the door to two more ‘houses’ for García Lorca’s serious and passionate women. He introduces them to the world of fashion houses, as if they were invited to present their latest collections in lavish Parisian salons in the mid-20th century. At the same time, Harrell brings together García Lorca’s younger and older women with the dazzling voguing houses. Starting in New York, mostly queer Hispanic and African American dancers have been gathering in ‘houses’ like the House of Xtravaganza, the House of Ebony and the House of Ninja since the 1970s in a bid to fight exclusion and injustice with style and pride. In Harrell’s house, a salon magnificently reconstructed at the KVS BOL, the perceived division between high culture and subculture disappears. After the minimalistic but powerful Dancer of the Year presented in 2019, Trajal Harrell returns to Kunstenfestivaldesarts with two versions of this new creation, a short version that evokes the exciting phenomenon of a fashion show and a longer version that seeks the theatrical depth of the original play.

The House of Bernarda Alba

Trajal Harrell was inspired to create The House of Bernarda Alba many years ago, while watching the legendary play of Federico Garíca Lorca, a drama about a Spanish family of mourning women, who are oppressed by the traditions of the time and the domineering mother: Bernarda Alba. In relation to voguing houses and the iconic houses of haute couture, Harrell will invite the audience to his salon of The House of Bernarda Alba, a replica of Christian Dior’s Salon de Maison from the 1940’s. Harrell raises the question, “Does it perform itself as a house of voguing or a couture house?” In any case Harrell theoretically vogues a couture house!

This house of Bernarda Alba is both of the handmade and that of a production line, in between the characters of Lorca’s play. Harrell uses the essence of his signature runway movement laced by butoh dance to build the collected ruins of Lorca’s house of mournful, dreaming and oppressed women.

The voguing culture is deeply embedded in Harrell’s work; a culture born in the 1960s by the African-American and Latin gay and trans communities in New York City. Emerging in 1980s, the marginalized communities, who were outcasts of the white heteronormative cultures, created their own safe spaces and balls, where they celebrated their queer identities. A subculture which provided empowerment and freedom of expression beyond white heteronormative gender identity. Voguing is also now referred to as a dance style which has its own aesthetics and rules inspired by American beauty pageants, the posing and walking of the models on the catwalk or in the Vogue magazine.

Another of Harrell’s important dance influence besides voguing and postmodern dance is butoh, a Japanese expressionistic dance that emerged after World War II. Butoh translated as “Dance of Darkness” was developed by Tatsumi Hijikata and Kazuo Ohno. Typically described as a theatre for resistance against modern society, the frightening and the dark become visible with the emergence of a new and beautiful grotesque.

Harrell’s precise creations are very well arranged soft revolutions of dance, because he is not only a choreographer, and thus a designer of movement and space, but also a visual artist who composes his evenings according to the aesthetic laws of visual art. The sculpturing and composing of the costumes plus the well curated combination of different music creates a unique landscape of encounters.

The Schauspielhaus Zürich Dance Ensemble, established at the Schauspielhaus Zürich in 2019 and directed by Harrell, takes you on a journey through a world that combines the culture of haute couture and the culture of voguing alongside the poetic essence of Lorca’s play. It tells the story of a house of five sisters, their grandmother, the housemaids and the head of the house – Bernarda Alba. Bernarda forces the women to be in mourning for eight years, to wear black, and to have no contact with men. A drama unfolds as the young daughter, Adela falls in love with Pepe, who is engaged with the eldest of her siblings, Angustias, who will inherit the fortune of the Alba family. Bernarda tries to put a stop to this secret love affair and to restablish moral order in the house. She shoots into the dark night, aiming at Pepe. Adela believing her love had been killed, hangs herself, not knowing that the bullet had missed him.

From the choreographer’s notebook

I am trying to further develop my runway dance by departing the world of pret a porter and moving back in history to the mid-twentieth century salons of Parisian fashion couture. These salons populated by the wealthiest who could afford couture clothing and the grand arbiters of taste who provide the cultural context in which the wealthiest move around are for me- ground for folly, foe, and fox.

I walk back into the historical imagination again – not voguing at Judson church in the 60’s, not a hoochie koochie show in the here and gone, and not the aesthetic meeting of Katherine Dunham and butoh’s mastermind Tatsumi Hijikata. I want to pose the possibility of Lorca’s House of Bernarda Alba as an operative house of couture fashion. And thus old questions might be settled anew from the perspective of voguing couture: What then is a house? How and who performs within a house? How is labor divided between mirth and maintenance? Here, I can employ butoh dance to operatically answer these questions. Delving into a dance around death, that, which is located in Lorca’s text, as well as butoh’s origin, gives me permission to explore color, texture, volume, light, density. What you see is not what you get. Here high art meets high content not to be submerged into some generic modern narrative about subcultures but to go high high high. How high can you go? Whether the high is from power, order, love, money or whatever; when you get there, how deep is the fall?

This is the heat in the house of Bernarda Alba. 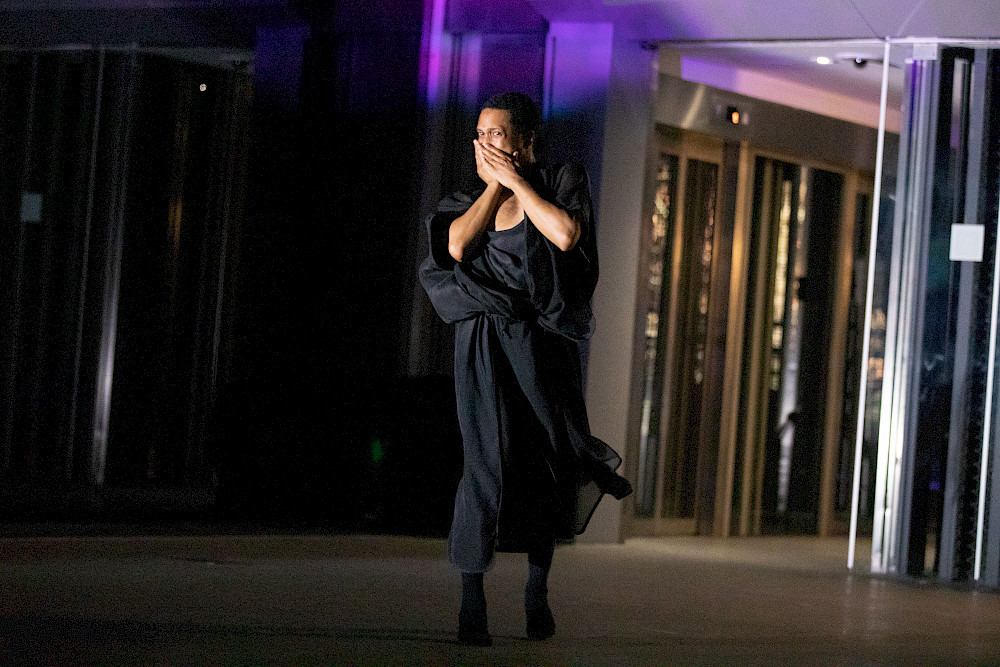 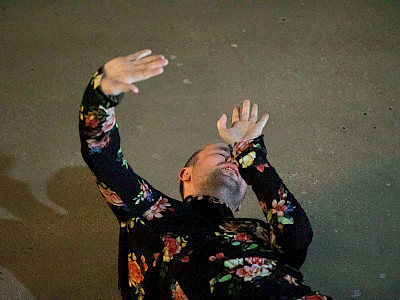