The Shadow Whose Prey the Hunter Becomes

How do we come together to make decisions in the best interests of our society? Three activists with intellectual disabilities have organized a public meeting addressing that question. On the agenda: a frank and open discussion of the history we would prefer to ignore and a future that is rapidly getting out of hand. Fearless and strikingly fresh, Australia’s leading theatre company returns to Brussels for the second time with their latest creation, The Shadow Whose Prey the Hunter Becomes. The ethics of mass food production, human rights, and the social impact of automation are skillfully woven into a compelling story that explores the unstable foundations of modern society. The actors question the parameters of traditional theatre and their own perceived limitations, challenging contemporary assumptions about artificial intelligence and the human mind. The result is a theatrical revelation inspired by (human) errors, misreadings, and misrepresentations. It is a timely reminder that no one is self-sufficient and we are all responsible.

The Shadow Whose Prey the Hunter Becomes

Reported in my newspaper last week was an item regarding Ireland’s last remaining ‘Magdalene laundry’ that was being restored as a memorial to the victims of incarceration and abuse in church and state-run institutions. Magdalene laundries housed single mothers along with other vulnerable and marginalized people and were known for their appalling living conditions; an example of what Roderic O’Gorman, Ireland’s government minister with responsibility for disability, described as a “difficult reckoning with [our] history of institutional abuse”.

The laundries are named in Back to Back Theatre’s The Shadow Whose Prey the Hunter Becomes alongside the toymaker Hasbro and a food processing plant in Iowa as examples of commercial, governmental and religious institutions that have long histories of abuse and exploitation of vulnerable people. As the actor named Sarah (Sarah Mainwaring) says during the performance: “We are treated as second-class citizens. Overmedicated, poor employment prospects and we are subjected to training techniques for animals.” She is referring to how people with intellectual disabilities have been badly treated by our institutions throughout history and how they continue to be dehumanized and trapped in precarious circumstances. Moreover, as the play unfolds it becomes clear that the actors are performing not only to discuss their own experiences of abuse, but to warn us in the audience. Shadow is a variation of the Lehrstücke or learning play and the actors hope to teach us that such cruelties can happen to anyone, anywhere, anytime. The technological, economic and political conditions that we have created have turned against us and we are reminded of the ways that we might all be shadowed by a deep sense of precarity and vulnerability.

The play makes visible the endemic lack of care for people and explores how we are failing to find a future for humanity and for the Anthropocene. From hellish laundries to dystopian turkey processing plants, the play shows how peoples’ work is atomized and denied empathy. To take one further example that is also currently in the news for their efforts to resist unionization: in the United States, Amazon ominously call their distribution warehouses ‘fulfillment centers’, when in fact they are places that exploit low paid and vulnerable workers whose work is controlled by algorithmic commands and continual monitoring.

Shadow explores how our subjectivity and sense of self are molded by technologies and algorithmic programs that make us vulnerable and exposed to machinic systems of governmentality. The workplace is one part of this, where the assault on subjectivity and human dignity is made visible and embodied; the ‘prey the hunter becomes’ is a portentous image of what the philosopher Franco ‘Bifo’ Berardi calls the capitalist subjugation of the human into a state of Semiocapitalism. As he explains, this is a way of understanding how capitalism has evolved from producing goods and services to creating an Infosphere that is “directly acting on the nervous system of society”. This leads to a breakdown of language (that becomes technocratic and paranoic) and a shrinking of our subjectivity. Semiocapitalism seeks to regulate our ways of being in the world. As Berardi says: “Accelerated by the power of technologies, the environment exceeds human measure. Human reason is exhausted.”

A meeting to save democracy

The meeting that is enacted in Shadow is a further expression of this exhaustion. Yet it is also a timely reminder of the need to activate a sense of collective imagination and to rediscover an ethics of care in and for the wellbeing of our communities. The play is set in a town hall meeting at a community centre. With its plastic chairs, handwritten name tags and a lectern – as a space for the local community to gather and address pressing issues it could be taking place anywhere. This particular meeting is in Geelong, a regional township that is 75 kilometers from Melbourne and the home of Back to Back Theatre. It begins with an acknowledgement of the meeting taking place on Aboriginal land, a civic ritual that is now common in Australia and one that serves both as a reminder of Australia’s violent settler history and is a symbolic way to recognize the continuity of indigenous custodianship. Watching the meeting unfold, we may well be looking at a valiant attempt to save democracy as an ideal of participation and inclusion; a place to debate existential problems. The performance of the fragility of the people in the play, who discuss neurodiversity and the awareness of differences of cognition and mobility, is matched by the fragility of the political forum they are enacting – that of the community meeting as a crucible for democracy. As an intimate gathering of human souls engaged in public debate, it is a remarkable synecdoche for our democratic political system that is so abused and beaten that we constantly wonder if it can survive. As the actor named Scott (Scott Price) says in reference to a conversation about the importance of respecting the expression of human intimacy: “We are lost at sea if The President of the United States [Donald Trump, Ed.] thinks he can grab other people’s sexual organs.”

The Shadow Whose Prey the Hunter Becomes reminds us that the very democratic institutions of which the town hall meeting is a forerunner seem to be lost at sea as well. As the theatre studies scholar Helena Grehan argues, Shadow shows us the need for a new sense of reciprocity to be fostered in our political institutions and to be practiced among our communities at large. She argues for a sense of ethical engagement that she calls slow listening. “This is a kind of listening that is resistant to dominant modes, in that it is not concerned with surface absorption but instead with a desire to be fully attuned to both what it is that is being said and the way that saying is performed, before making any move to respond.” She affirms the need for silence, for taking time, for empathy and for careful sensory attention to the other. Grehan’s reading of Shadow explores how the meeting’s multivalent discussion on questions of diversity, ability, and subjectivity “enacts a demand for slow listening that is … deeply needed”. She notes how the dramaturgy of the performance shows a pathway that is marked by the actors’ haltingly conversations that “resonates with or reinforces the need for a slowing of communication and response”. Following from this, it is the exposure of vulnerably and the fraught way that the actors seek to find ways to respond to the complexities of their situation that shows an effective way of enacting resistance to authoritarian demagoguery. In modelling a politics of slow listening, the performance reminds us of the need to keep the forms of democracy in good order even when the way to do this is not clear. In fact, it is the messiness and the existential depth of the discussion in Shadow that resists the absolutism of anti-democratic politics. This is also signaling to something larger than a meeting among political subjects. Reciprocity might rescue democracy, but to do so, it broches the need for other forms of reciprocity such as listening to the environment and to the human collapse inside Semiocapitalism. In this way, the Acknowledgement to Country that starts the meeting is not only a gesture towards reconciliation but a way of listening to the precarious histories of peoples and the land.

Shadow has no false consciousness, no resolution. The feeling of the meeting is summed-up when the actor named Simon (Simon Laherty) says of the people in the meeting, “They’re not getting it,” to which Scott quips, “Their comprehension is mild.” As the theatre critic Cameron Woodhead wrote, the meeting is “a philosophical exploration of some intractable failures of human imagination”. In other words, the meeting concludes that we cannot imagine anything other than the situation we are in, even when everyone knows it is not good.

At the same time, the meeting shows us the resilience of people living with precarity. And the very act of meeting itself deserves some thought. It surely means something different now. With the experience of covid in mind, this meeting staged in a theatre is a gathering of people that confronts anxieties about being together and creates new intimacies that might help to wash away some of the political paranoia of Semiocapitalism that was only intensified by the pandemic. It is live and fleshy. In this way, we can hope that Shadow is a manifestation of the Artaudian idea of theatre as a crisis ritual, a way of enacting a form of collective resistance to demagoguery by asking us to shift our awareness and sensibility; a way of becoming something else.

The Shadow Whose Prey the Hunter Becomes has been co-commissioned by Carriageworks, Theater der Welt, Düsseldorf 2020, the Keir Foundation, the Thyne Reid Foundation and The Anthony Costa Foundation, supported by Creative Partnerships Australia through Plus 1, with development support from the Geelong Arts Centre, Arts Centre Melbourne, Melbourne International Arts Festival, the Une Parkinson Foundation, The Public Theater (New York City) and ArtsEmerson (Boston)

The Shadow Whose Prey the Hunter Becomes was developed, in part, at the 2019 Sundance Theatre Lab at MASS MoCA 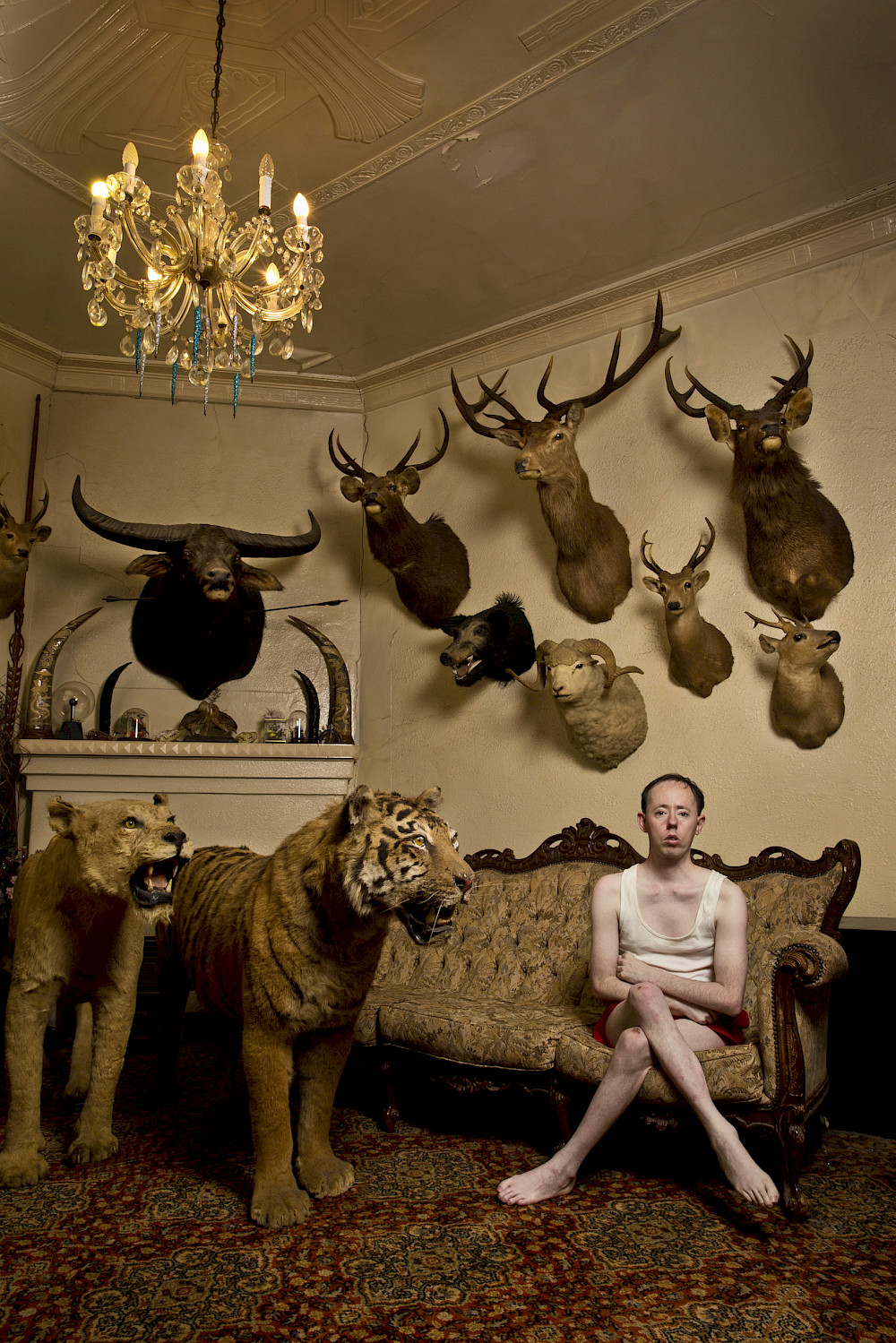 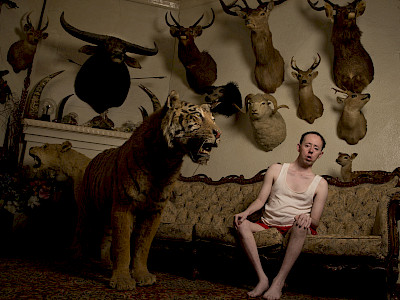 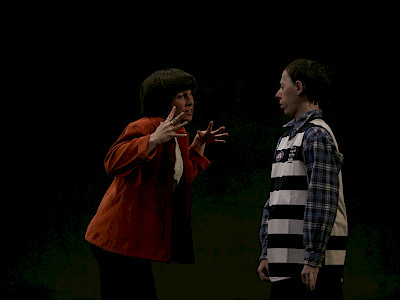 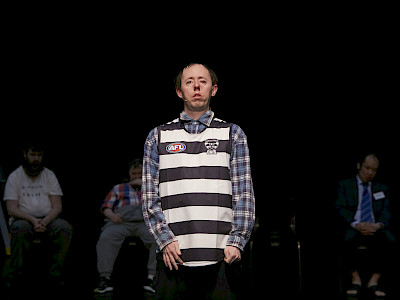 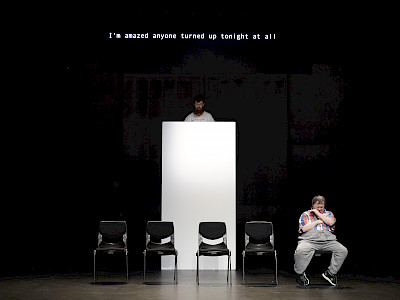